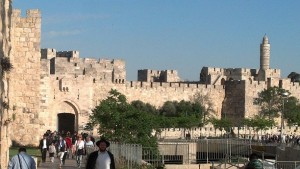 Indeed, more than two dozen Arab passersby of all ages entering or exiting the once volatile east Jerusalem entrance either said they were unaware of the proposal or simply did not care.

Asked his reaction to the possible relocation, Hasan, a Palestinian man in his 60s, who requested his last name not be published, responded: “It does not matter to me. Why should I care about where the US Embassy is located? It does not change my life one bit.”

Fadi Kiswane, 18, who sat with several friends on the stone steps outside the historic gate, said he was unaware where the embassy was currently located.

“The US Embassy is in Tel Aviv?” he asked with genuine incredulity. “And they want to move it to Jerusalem? So what?”

Donned in a scarlet hijab, Marrah Sofian, who is training to become a secretary at an area vocational school, also said she was unaware where the embassy was located, or that there is ongoing discussion about moving it to Jerusalem.

“This is news to me,” she said. “I don’t understand why it matters though. I don’t think most residents of east Jerusalem know or care about this.”

Meanwhile, a burly Palestinian cab driver in his 40s, who refused to provide his name, brushed off the question as “stupid.”

“Don’t waste my time with such unimportant things,” he said heatedly. “I have better things to think about.”

“For me,” Margalit said, “it’s clear that [moving the embassy] is a big mistake. The first goal should be to try to finish the occupation and bring some kind of peace to this region. These are the main tasks.”

“I would assume that these people are busy getting by day-to-day, and so are less involved in the political sphere,” she said.

“Peace Now views east Jerusalem as occupied territory, and until there is a peace agreement that is based on a two-state solution with two capitals in Jerusalem, the embassy should remain in Tel Aviv,” Ben-Nun said.