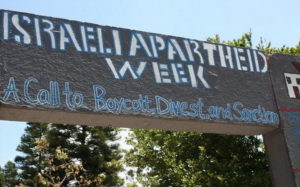 Vacating a 2014 decision by the Obama administration, the U.S. Education Department decided to adopt the international definition of anti-Semitism that recognizes how Jew-hatred can be camouflaged as anti-Zionism or anti-Israel bias.

The U.S. Education Department’s Office of Civil Rights has decided to adopt the international definition of anti-Semitism, which defines Judaism not only as a religion but also an ethnicity and includes holding Jews responsible for Israel’s actions as a form of anti-Semitism, Israel Hayom learned Wednesday.

According to a letter written by Assistant Education Secretary for Civil Rights Kenneth L. Marcus to the Zionist Organization of America, anyone who acts “to deny the right of the Jewish people to self-determination, on the grounds that the State of Israel’s existence is a racist endeavor” or applies double standards to Israel that it does not apply to any other democratic country will be deemed an anti-Semite.

The ZOA lauded what it called the “groundbreaking decision,” saying, “This definition accurately addresses how anti-Semitism is expressed today; it recognizes that Jew-hatred can be camouflaged as anti-Israelism or anti-Zionism. The OCR is not only reassessing the evidence already in the record; the agency is also going to determine whether a hostile environment for Jewish students currently exists at Rutgers [University].”

Pro-Palestinian activists in the United States have warned the move will hinder pro-Palestinian efforts as any such activity will be deemed anti-Semitic.

In 2011, the ZOA filed a complaint against Rutgers alleging that at an anti-Israel event that organizers had said would be free and open to the public, the Belief Awareness Knowledge and Action group discriminated against Jewish and pro-Israel students by charging them admission.

As evidence, the ZOA cited an email in which one of the event’s organizers wrote, “We need to start charging because 150 Zionists just showed up! … If someone looks like a supporter, they can get in for free.”

While the OCR looked into the matter, it ultimately closed the investigation, citing insufficient evidence of anti-Semitism. At the time, the U.S. definition of anti-Semitism referred to Judaism as a religion only.

The ZOA appealed the decision.

In a letter to the ZOA, Marcus said he was vacating the 2014 decision by the Obama administration and re-examining the case as possible discrimination against an ethnic group.

“The visual perception of the presence of ‘150 Zionists’ referenced in the email could have been rooted in a perception of Jewish ancestry or ethnic characteristics common to the group,” Marcus wrote.

“In cases such as this, it is important to determine whether terms such as ‘Zionist’ are actually code for ‘Jewish.'”

The ZOA issued a statement saying, “It took a leader like Kenneth Marcus to finally decide the ZOA’s appeal and to also make it clear that OCR will finally be using a definition of anti-Semitism that makes sense and that reflects how anti-Semitism is so frequently expressed today, particularly on our college campuses.

“Hate groups like Students for Justice in Palestine try to convince others that their attacks on Zionism and Israel are legitimate political discourse.  But as the State Department definition of anti-Semitism recognizes, these attacks are often a mask for Jew-hatred, plain and simple.”

The move is the latest in a series of pro-Israel steps taken by the Trump administration. It follows the U.S. decision to recognize Jerusalem as Israel’s capital and move the U.S. Embassy to the city; cut funding to UNRWA, the U.N. aid agency for Palestinian refugees; and close the PLO mission in Washington.