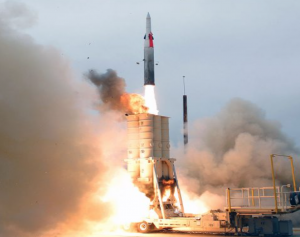 “It has significant range constraints within the Mediterranean. And one of the better places to test is in Alaska, from Kodiak,” Syring told the U.S. House panel. “And we intend to do that next year.”

“The Missile Defense Agency, MDA, has approached us about doing the Israeli program out of Kodiak, and we are in the process of negotiating that contract today,” Campbell said in a phone interview.

The work would be a component of the $80 million contract MDA and the Alaska Aerospace Corporation announced a year ago.
Also under that umbrella contract, Campbell says MDA plans to launch missiles from the Kodiak Island facility sometime in the next few weeks or months.

“The test we have for THAAD – that’s the Terminal High-Altitude Air Defense program – that’s going to be a series of tests coming up this summer,” Campbell said. “The dates are classified, but prior to the launches there’ll be public notice given as to when the launch is going to occur. But there will be two launches this summer.”

The Arrow 3 missile is launched from Palmachim air base in central Israel on December 10, 2015. – Photo: Israel Ministry of Defense

The Missile Defense Agency conducted a successful test over the Pacific two weeks ago.  was set up to replicate the scenario of a North Korean launch at the U.S., Adm. Syring told committee members, but for the test, everything was moved a few thousand miles south, so the interceptor was launched from California instead of Alaska’s Fort Greely.