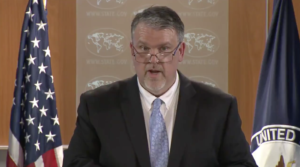 Watch short State Department briefing detailing Shiite group’s history in terror throughout Europe, Asia, South America, offerings $12 million for information leading to the capture of two of their senior operatives, as Hezbollah is determined to give itself an option to attack on American soil.

The State Department’s Counterterrorism Bureau said it would give $7 million and $5 million, respectively, for information leading to the capture of Talal Hamiyah and Fuad Shukr, reported i24news.

An informational leaflet described Hamiyah as the head of the organization’s External Security Organization, its “element responsible for the planning, coordination, and execution of terrorist attacks outside of Lebanon.”

Shukr was described as a senior operative who played a central role in planning and carrying out the 1983 bombing of a U.S. Marine Corps barracks in Beirut that killed 241 American service personnel.

Nicholas J. Rasmussen, the director of the National Counterterrorism Center, said before announcing the reward that the U.S. believes that Hezbollah is determined to give itself an option to carry out attacks inside the United States.

“It is our assessment that Hezbollah is determined to give itself a potential homeland option as a critical component of its terrorism playbook,” Rasmussen said during a briefing, adding that before the September 11, 2001 attacks, Hezbollah was responsible for more American deaths than any other foreign terrorism group.

Hezbollah is blacklisted as a terrorist organization in the United States, which regularly sanctions members of the group.

Washington has in the past imposed sanctions on the group’s leader Hassan Nasrallah and two other members of the organization, for their alleged role in aiding the Syrian government in its crackdown on opposition forces.

In May, Saudi Arabia and the United States jointly blacklisted Hashem Safieddine, president of Hezbollah’s executive council, which oversees the group’s social and economic activities.