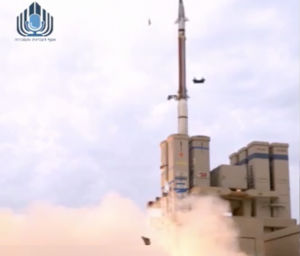 WATCH: Israel’s Defense Ministry announced Wednesday’s trial testing concluded successfully in its entirety, managing to intercept every single simulated target in the air, and at a high altitudes far from the Israeli coastline.

The Israeli security apparatus completed an experiment stretching over a number of days of the new advance David’s Sling system capable of defending against mid-range missiles.

The system is being developed and manufactured jointly by Israel’s state-owned Rafael Advanced Defense Systems Ltd and Raytheon Co, a top US arms maker.

During the experiment that took place on Wednesday, a number of precision missiles were launched from Israeli Air Force (IAF) jets above the Mediterranean, at which the advanced system dully fired interception rockets upon detection

According to the director of the Ministry of Defense and the head of the project’s designers Rafael Advanced Defense Systems Ltd. (RADS), the experiment concluded successfully in its entirety, managing to intercept every single simulated target in the air at a high altitude far from the Israeli coastline.

Officials from the RADS and the Defense Ministry circumvented a question asked by Ynet as to whether a system failure was recorded yesterday during the experiment, responding instead by saying, “This is a series of experiments that lasted a number of days and was completed with full success.”

Weighing hundreds of kilograms, the simulated missiles that the system blasted out of the skies were just as precise. The first version of David’s Sling has already been transferred to the IAF which is expected to announce that it will be fit for operational use this year.

The system is intended to complete Israel’s air defense capabilities, integrating itself into the anti-missile family which includes the famous Iron Dome  short-range interceptor system and the Arrow ballistic missile interceptor, both of which are in service.

The experiment marks the fifth of its kind for the David’s Sling system since the completion of its development.

The latest round of testing also included American cooperation, with US development paramount to its creation, both in terms of its design and funding.

The sophisticated technology with which the state of the art system is equipped is designed to protect the entire breadth of Israeli landscape.