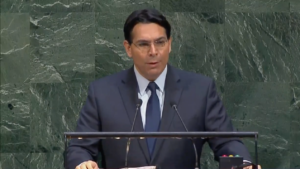 US threats to cut off aid to countries voting in favor of a General Assembly resolution condemning the US for deciding to move its embassy to Jerusalem did not move the needle too far inside the world body, as the measure passed by a vote of 128 against nine, with 35 abstentions.

Before the vote, US ambassador Nikki Haley said the UN’s hostility toward Israel is “wrong “ and “undermines the credibility of this institution, and that in turn is harmful for the entire world.”

Haley said that Israel remains in the UN, despite the organization’s  hostility, because “it’s important to stand up for yourself. Israel must stand up for its own survival as a nation; but it also stands up for the ideals of freedom and human dignity that the United Nations is supposed to be about.”

Prime Minister Benjamin Netanyahu reaffirmed Israel’s rejection of the resolution, but praised the countries that didn’t vote in favor of it — countries the prime minister has visited.

“Israel thanks President [Donald] Trump for his unequivocal position in favor of Jerusalem and thanks those countries that voted alongside Israel, alongside the truth,” Netanyahu said in a statement.

Reiterating threats to remember who voted against the US, Haley said her country “will remember this day in which it was singled out for attack in the General Assembly for the very act of exercising our right as a sovereign nation. We will remember it when we are called upon to once again make the world’s largest contribution to the United Nations. And we will remember it when so many countries come calling on us, as they so often do, to pay even more and to use our influence for their benefit.”

Nevertheless, the overwhelming majority of the world’s body adopted the resolution declaring the US decision to recognize Jerusalem as Israel’s capital as “null and void.” The resolution did not mention the US by name.

Twenty-two of the EU 28 countries voted for the resolution, including Germany, which in the past has abstained on measures attacking Israel.

Five EU countries, however, broke with the EU consensus and abstained: the Czech Republic, Hungary, Latvia, Poland and Romania.Lithuania did not show up for the vote.The vote showed that Israel has made inroads in Latin America, as both Argentina and Mexico abstained. Notably, however, India — with whom Israel has forged very strong ties — voted for the measure.

In addition to the US and Israel, the other countries which voted against the measure were Guatemala, Honduras, the Marshall Islands, Micronesia, Nauru, Palau and Togo.

Israel’s ambassador Danny Danon said before the vote that “Those who support today’s resolution are like puppets. You are puppets pulled by the strings of your Palestinian puppet masters. You are like marionettes forced to dance while the Palestinian leadership looks on with glee.”

This vote, he said, “is nothing more than a performance of delusion.”