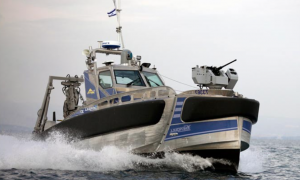 An unmanned watercraft code-named the “Seagull” was unveiled by Elbit Systems on Monday afternoon in a demonstration that took place in the gulf of Haifa.

According to Elbit, the innovative watercraft operates autonomously and can perform a number of security related tasks, including submarine detection and underwater explosive ordinance detection and removal. Additionally, the “Seagull” can be used for patrols, electronic warfare, and underwater topographical surveys.

The vessel is 40 feet long and has the ability to operate continuously for 96 hours, and can carry out missions in a safer and more effective manner than can be done with other manned vessels.

A spokesperson for Elbit stated, “it is able to perform its tasks due to a variety of advanced above water and underwater sensors, thereby giving it the high levels of effectiveness and efficiency it needs to complete its missions.”

Amongst other systems, the “Seagull” has an automated navigation system which enables it to navigate the seas autonomously and in compliance of international maritime law, radar, on board weapons systems, day and night vision, underwater robotic capabilities, and more.

“The ‘Seagull’ can operate and accomplish a variety of missions, can be launched from a port or a landing craft, and can take the place of, or complement, manned vessels.” 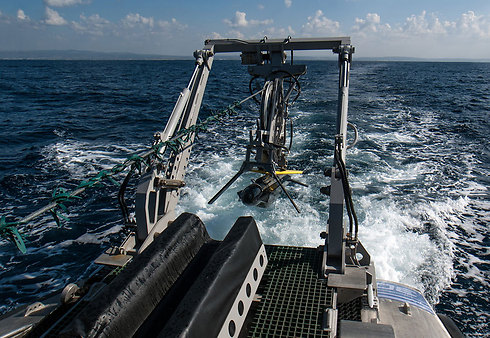 In countering the threat posed by underwater mines, the vessel is able locate and destroy them autonomously, without the physical involvement of a live sailor, thereby negating the risk of bodily harm or death.

“The system allows for the planning of missions in familiar and unfamiliar territory, and enables scanning, locating, and neutralizing underwater mines. It is also equipped with auxiliary accessories which enable it to detect additional underwater threats as needed.”

Elad Ahronson, the head of the Elbit intelligence branch of which the “Seagull” division is a part, added, “As the world leaders in unmanned technology, we at Elbit are proud to unveil new our new and innovative solution to sea borne threats. As we did in the field of unmanned aerial technology, we are pleased to offer a systematic solution to threats which have until now been dealt with by expensive, manned ships.”