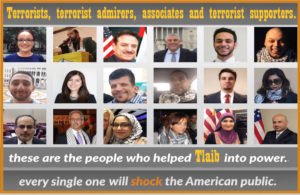 The Israel Advocacy Movement investigated Congresswoman Rashida Tlaib’s inner circle and exposed 18 of her closest colleagues, supporters and friends, many posting content exalting the mass-murder of Jews, leaving a serious question on her suitability for the U.S.Congress.

By the Israel Advocacy Movement

Member of the U.S. House of Representatives, Rashida Tlaib (D-MI) is a terrorist supporter. She is proud of it and it is no coincidence that 18 of her closest friends & supporters have close & personal terrorist ties.

So, is it healthy to have such a hater, and one whose closest supporters associate with actual terrorists, in the US Congress? Are her biased inclinations conducive to the work & legislative duties needed to represent millions of American constituents?

I shudder to imagine a host of Congress members, all financed, supported and admired by radical Islamic terrorists, running the United States. What is the Democrat Party turning into!

If you want to view more video reports such as this one, please follow the Israel Advocacy Movement on social media or visit their website.