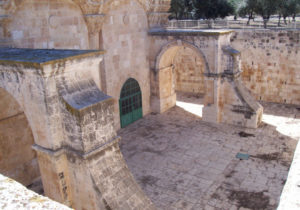 Sheikh Abdelazeem Salhab, chairman of the Waqf Council appointed by neighboring Jordan, said Tuesday that the structure, called the Gate of Mercy shrine, would “remain open for Muslims to pray,” despite Israel’s ultimatum to close the site by next Monday.

Looking down at Muslims praying outside the Golden Gate, also known as Gate of Mercy. – Screenshot: YouTube

Salhab demanded that Israel permit the waqf to renovate the building and revoke orders banning dozens of waqf officials, guards and worshippers from the sacred compound.

Israel sealed off the structure in 2003, claiming it was home to a group with ties to Islamic terrorists. The waqf has recently challenged the closure, convening and staging prayer protests in the area.