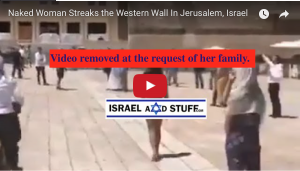 “She came in [to the Plaza] fully-dressed,” a witness told Channel 2. “Then at one point she started to undress, acting as if she had a purpose, like she wanted to make a provocation.”

“People started to shout and cry out, and as she headed towards the men’s section, she was stopped by force.”

The guards removed the woman to a nearby restroom and called police. Officers covered the woman up and transferred her to a police station for questioning.

According to the initial investigation, the woman appears to be suffering from a mental illness.

Police say the young woman has been returned to her parent’s home following interrogation and a psychological evaluation.

Apparently, she may have had a psychotic episode, and did not ‘streak’ to make a political statement or on a whim, as was first thought, so I heeded to the parents request in their public plea to remove the clip, thinking I would feel the same had this been one of my daughters.