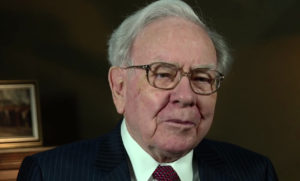 Before Buffet’s investment in Teva, the billionaire’s first non-American acquisition was of the Israeli company Iscar in 2006 for over $6B, then Ray-Q Interconnect and AgroLogic, but in 2017 the chairman and CEO of Berkshire Hathaway invested $5m. in Israel government bonds for his own personal portfolio.
– “I’m a big believer in Israel’s economy… I didn’t invest the money in any other country. That’s the strongest vote of confidence I can give,” admitted Buffet.

With a track record for placing winning bets at opportune moments, American billionaire Warren Buffett is one of the most scrutinized investors in the world – and recent Israeli investments are showcasing his love affair with the Jewish state.

Two weeks ago, a younger trader at Buffett’s giant Berkshire Hathaway investment firm bought a $350 million stake in Israel’s debt-laden, generic-drug giant, Teva Pharmaceutical Industries – which has a market worth of some $19 billion, having lost half its value in the past two years. Buffett’s company has historically been averse to investing in biotech stocks.

The purchase initially sent share prices soaring by 12%, with the stock’s value tapering down ever since. Investors had been dumping Teva stock for months, and Buffett’s well-timed purchase could turn the tide for the pharmaceutical firm, signaling investor confidence in new CEO Kare Schultz’s cost-cutting measures.

In any case, the investment in Teva is an endorsement of Israel’s flagship firm, the largest local company by market valuation. “He honestly loves Israel,” Izzy Tapoohi, former president and CEO of Development Corporation for Israel Bonds, told The Jerusalem Post.

Tapoohi has been instrumental in bringing Buffett to fund-raise for Israel Bonds. “Buffett is just unbelievable. He runs his $300b. business with 15 people. He welcomed us [Israel Bond executives Harold Marcus and Stu Garawitz] at the door. It’s like he didn’t have a secretary or assistant. The guy is so down to earth.”

In 2017, the billionaire investor purchased some $5m. of Israel government bonds for his personal portfolio. Other investors that he brought along to fund-raising events in Omaha, Nebraska, bought $45m. more, according to Tapoohi, who is now the president and CEO of Birthright Israel Foundation.

“The fact that he’s continuously buying Israel bonds all the time says something,” Tapoohi said, paraphrasing a conversation where Buffett asked him what is the longest maturity on Israel bonds. He replied that it was 10 years.

“Ten years,” Buffett is said to have muttered, adding: “The State of Israel will be around forever. If you told me 30 years or 100 years, I would’ve bought even more. So, it’s a pity you don’t have a longer duration on your bonds.”

In total, Buffett has encouraged investors to go ahead with the purchase of around $200m. worth of Israeli bonds.

The billionaire investor’s first non-American acquisition was of Israeli company Iscar. In 2006, Berkshire Hathaway paid $4b. for an 80% stake in the metal- cutting-tools company, according to Reuters. It then bought the remaining 20% stake for $2.05b. in 2013.

Other Israeli companies that Berkshire Hathaway has purchased include Ray-Q Interconnect, which supplies electronic connectivity equipment for military and aerospace firms. Ray-Q was bought for an undisclosed sum.

At the time of the Iscar purchase, Buffett made a rare overseas trip to Israel and told Yediot Aharonot: “Israel is the leading, largest and most promising investment hub outside the United States… We’re the world’s fifth-biggest investment firm, but for me, the No. 1 country is Israel, which is far ahead of larger and richer countries.”

Buffett added in the interview: “I’m not Jewish, but Israel reminds me of the United States after its birth. The determination, motivation, intelligence and initiative of its people are remarkable and extraordinary. I’m a big believer in Israel’s economy… I didn’t invest the money in any other country. That’s the strongest vote of confidence I can give you, no?” he said.

And people who have earned millions from investing with Buffett have used some of it to help Israel – such as the estate of Holocaust survivors Howard and Lottie Marcus; they used their proceeds to donate some $400m. to the Ben-Gurion University of the Negev in 2016.

Buffett has often gushed about his love and support for the Jewish state. When buying bonds in 2017, he touted Israel’s culture of innovation.

“Israel started from absolute scratch when it was established 69 years ago, and look where it is now,” the Post reported Buffett as saying. “There is no other country in the world that has gone as far in such a short period. In the process, Israel has become a showcase of what can be done when you unlock an ocean of human potential. I like backing winners and am happy to own the bonds of Israel.”

Berkshire Hathaway was unavailable for comment by press time.