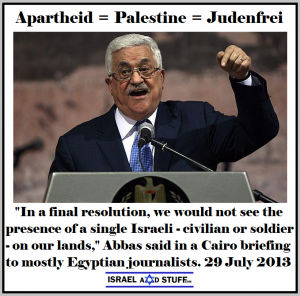 The Israeli Foreign Ministry has declared that it would engage in an international campaign to denounce Polish President Mateusz Morawiecki, who told participants at the Munich Security Conference on Feb 17, 2018, that Nazis were not the only perpetrators of the Holocaust – there were Jewish perpetrators as well.

Morwaiecki was essentially quoting the Ph.d. thesis of Mahmoud Abbas, who has ruled the Palestinian Authority for 12 years.

The Center for Near East Policy Research obtained a copy of that doctoral thesis by photocopying the it from Al Quds University, a 20 minute distance from the Center’s  office on Hillel Street in Jerusalem.

The title of Abbas’s doctoral thesis is “Zionist leadership and the Nazis.”, whose blurb is as foo “The secret ties between the Nazis and the Zionist movement leadership.”. Abbas’ dissertation was written in 1982 when Abbas was a fellow at the Patricia Lumumba Institute for Oriental Studies in Moscow.

Abbas’ thesis is that the Zionist movement worked hand in hand with the Nazis, people, collaborating with them for the Jews’ destruction because the Zionist leaders viewed “Palestine” as the only legitimate place for Jewish immigration.

In May 2003, two months after Abbas became the Prime Minister of the Palestinian Authority, Rabbi Abraham Cooper of the Simon Wiesenthal Center declared that “It is time for Prime Minister Abu Mazen to publicly denounce Holocaust Denial to his constituency and to install leaders in Media and Education Ministries who are prepared to teach Palestinian children the truth about their Jewish neighbors.”

Abbas ignored the demand of the Simon Wiesenthal Center .

Instead, Abbas has indoctrinated a new generation of Palestinian  pupils to believe that mass murder of Jews in World War II was carried out by Jews who worked with the Nazis.

To this day, the Israeli government has never requested that the PA remove Abbas’s thesis from the shelves of Palestinian education

For the past 15 years, our center has asked the Israeli government and all funders of the PA and UNRWA if they would  demand that Abbas renounce his thesis and remove it from the shelves of PA and UNRWA schools.

The Center for Near East Policy Research, which has commissioned the translations of all school books now used in UNRWA schools, underwritten by the Wiesenthal Center, has asked all donor nations if they would demand the removal of school books that indoctrinate a new generation for war against the Jewish people.

Our Center has never received an answer to these  queries from any government, including the Israeli government.

If Warsaw were to confer Polish citizenship upon  Abbas, the government of Israel could feel free to demand that the world denounce Abbas together with Polish President Mateusz Morawiecki, each for their respective libel against the people of Israel.

David Bedein is director of Israel Resource News Agency and heads the Center for Near East Policy Research, author of Genesis of the Palestinian Authority and Roadblock to Peace: How the UN Perpetuates the Arab-Israeli Conflict: UNRWA Policies Reconsidered.

More from the author ►