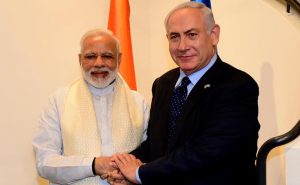 During his historic visit to Israel, the first for an Indian premier, Prime Minister Narendra Modi is expected to sign a host of agreements with Israel in the fields of defense, technology, water, and agriculture, bringing the two countries ever closer.

India’s Prime Minister Narendra Modi said his historic visit to Israel – the first Indian premier to do so – celebrates “this ancient bond between both our nations” and lauded “the link between our people [that] dates way back to the Jews in India” during his joint press conference with his Israeli counterpart Benjamin Netanyahu on Tuesday.

Following an official reception at Ben Gurion airport after he touched down on Israeli soil, and visits to the Yad Vashem Holocaust Memorial, the grave of Theodor Herzl and a flower farm, Modi said Israel felt like “a home away from home”.

In short remarks before retiring to a private dinner with his wife Sara and the Indian PM, Netanyahu said Israel and India represent a “partnership of talent” and said the two nations were sister democracies “not equal in size but … equal in spirit.”

Earlier, both leaders spoke as Modi arrived for the first ever visit by an Indian premier to the Jewish State amid growing ties between the two countries including billions of dollars in defense deals.

The two leaders embraced heartily and gave brief speeches, pledging to work together on issues including security, agriculture and energy.

“Prime Minister, we’ve been waiting for you a long time, 70 years in fact,” Netanyahu said.

“Yours is truly a historic visit. It’s the first time an Indian prime minister is visiting Israel. We receive you with open arms. We love India. We love your culture, your history, your democracy. We view you as kindred spirits,” he added.

Modi responded that it was his “singular honor to be the first ever prime minister of India to undertake this groundbreaking visit to Israel.”

“My visit celebrates the strength of centuries-old links between our societies,” Modi said. “The people of Israel have built a nation on democratic principles. They have nurtured it with hard work and the spirit of innovation. India applauds your achievements.”

Modi thanked Netanyahu “for the invitation and for receiving me with so much warmth.”

Following the welcome ceremony at the airport, Modi and Netanyahu visited, along with Agriculture Minister Uri Ariel, the Danziger Flower Farm, where a white chrysanthemum was named after the two leaders. Israel is a leading exporter of fresh flowers.

The two then shuttled to Jerusalem to pay tribute at the Yad Vashem Holocaust Museum and Memorial, an almost essential stop on any world leader’s itinerary in Israel, where Modi signed the Yad Vashem Guest Book and took part in a memorial ceremony.

Prime Minister Modi and PM Netanyahu went to visit the grave of the visionary of the Jewish State, Theodor Herzl. – PMO

During the visit, the Israeli PM suggested, apparently spontaneously, that they make an impromptu visit to the grave of the man considered the founding father of Zionism – Theodor Herzl – which lies adjacent to Yad Vashem. Netanyahu then watched, smiling, as Modi placed a small rock on the marble tomb.

The two leaders will then make joint statements from Netanyahu’s official residence in Jerusalem, before retreating for a private dinner. He will hold talks with Netanyahu and President Reuven Rivlin on Wednesday before meeting with members of Israel’s Indian community.

During his speech at the airport, Modi noted that his arrival in Israel on July 4 marks exactly 41 years since Israel’s famous Operation Entebbe in 1976, a hostage-rescue mission undertaken by the IDF in order to free captives taken by a militant Palestinian group, in which Netanyahu’s brother Yonatan was killed.

“Today is July 4. Exactly 41 years since Operation Entebbe, today when your prime minister and my friend Bibi lost his elder brother Yoni while saving the lives of so many Israeli hostages,” Modi said.

“Your heroes are an inspiration for the younger generations,” he said.

The Indian Prime Minister said that his own country’s youth, 800 million citizens below the age of 25, “are also its driving force,” and promised to forge “a strong and resilient partnership with Israel.”

Netanyahu said that the India-Israel ties would soar to new heights with the combination of “Indian talent times Israeli technology.”

“But actually, my friend, the sky isn’t the limit because today even our space programs are working together to achieve even greater heights. The ties between our talented innovative peoples is natural,” Netanyahu said, addressing Modi.

He quipped about the technological prowess of their two nations, joking that “in Silicon Valley in California the two most common languages overheard are Hindi and Hebrew. Occasionally, one hears some native English too.”

Finally, Netanyahu addressed the some 100,000 Israelis of Indian descent, calling them a “wonderful human bridge between our two nations, our two peoples.”

Modi is expected to sign a host of agreements with Israel in the fields of defense, water, and agriculture.

India is the world’s biggest importer of defense equipment, and Israel has become one of its major suppliers.

The deal will see IAI provide India with an advanced defense system of medium-range surface-to-air missiles, launchers and communications technology.

India, which has traditionally voiced its support for Palestinian statehood and initially shunning diplomatic relations with Israel, has seen increasingly warming relations as it seeks closer defense ties with Israel.

India is currently the world’s fastest growing major economy, a status that Modi is hoping to cement by drawing in more foreign investment.

He has sought to do that in part by encouraging manufacturers to do business in Asia’s third-largest economy. Israel’s defense deals have included components that will be assembled in India.