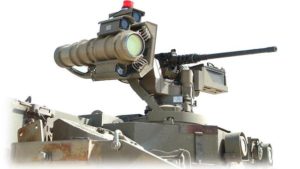 In the incident, observers from the Gaza Division identified two terrorists who tried to exploit the IDF’s focus on dealing with disturbances near the security fence in the area of the Gaza neighborhood of Shuja’iyya, in order to plant an explosive device.

The forces were directed by observers, isolated the scene and, using the mounted laser system, detonated the bomb. The radius and fragments from its explosion led the army to conclude that, would it have been triggered near IDF troops, the results would have been fatal.

The laser system has been in use for a number of years by IDF forces, mainly in the security sectors on the northern and Gaza borders, and aims to remotely and safely neutralize threats such as improvised explosive devices (IEDs), unexploded ordnance, mines and other explosive threats.

Use of lasers in warfare is carried out sparingly, and often surreptitiously, due to legal restrictions enshrined in international conventions that prohibit its use, for fear of mortally injuring humans and causing fatal burns.

The soldier who operates the mounted system inside the vehicle’s interior has two choices in neutralizing devices: either firing a bullet from a mounted 0.5-mm machine gun at the bomb in order to blow it up, or project a laser beam at the cargo, which causes its rapid heating and detonation without the effect of the blast and noise, within a few seconds.

Both options are controlled by a joystick and a display with a clear separation between them. The sights of the system can be operated both in daylight and at nighttime, and can be used to probe the charge remotely—from a distance of several hundred meters.

The defense establishment estimates that in the next few years, the use of laser systems will be increased to tackle other threats, such as drones, which have already been used by organizations such as Hezbollah and Hamas.

Ynet learned and published the details of the incident on Thursday, several hours after two explosive devices were detonated about 100 meters from an armored force that operated following the identification of a suspect near the security fence in the northern Gaza Strip.

The force was not hurt and the IDF suspects that an RPG rocket was also fired at it.