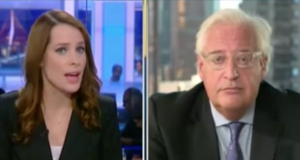 In a TV10 news interview, David Friedman, Donald Trump’s adviser on Israel affairs, says a President Trump would support Israel and let Jerusalem decide how to solve its conflict with the Palestinian Authority.

David Friedman, Republican presidential nominee Donald Trump’s adviser on Israel affairs, said on Wednesday that if Trump is elected president, he will not try to force a solution on Israel with regards to its conflict with the Palestinian Authority (PA).

“He’s not for or against, per se, a two-state solution,” Friedman told Channel 10 News’s Tamar Ish Shalom in an interview. “What he’s for is respecting the independence of the Israeli government and their democratically elected leadership to reach, without pressure from the United States, their own vision of how the Israelis and the Palestinians should live side by side.”

There are numerous paths which can be taken to solve the conflict, Friedman added, but Trump “will not have his finger on the scale trying to push Israel in a particular direction. He has great confidence in the Israeli government and the Israeli people.”

Trump believes the people of Israel are peace loving people who “are doing the best they can to balance their desire to achieve human rights and democracy and their need for security against a very treacherous enemy.”

“Unless and until they come to him seeking help, I think he’s going to respect their views,” Friedman told Channel 10 News.

“Israel is an ally and a partner, and they’re a partner in a very important task – the joint effort to defeat radical Islamism. So it’s not in the United States’ interest to weaken Israel or to cause Israel to be distracted by the political wishes outside of their own country,” he added.