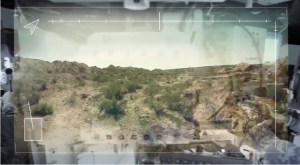 Elbit Systems unveiled a helmet-mounted system on Wednesday designed to allow armored personnel carrier and tank crews to see straight through their armor.

The helmets give soldiers a 360-degree, real-time view of their surroundings while in the vehicle.

Called IronVision, the system has attracted the interest of the IDF, which may choose to acquire it. If it does, the product would represent a significant leap in the capability of personnel in closedhatched armored fighting vehicles to identify threats, as well as friendly forces.
In urban, combat arenas, armored vehicle crews must stay inside to avoid being exposed to antitank, small arms and mortar attacks, of the type Hamas showered on IDF armored units in the Gaza Strip in the 2014 war (Operation Protective Edge).

Armored vehicle personnel have, until now, suffered from an inability to see much around them, company sources said. Alternatively, they risk their lives by standing with their heads exposed outside the vehicle.

The IronVision helmet pulls together video feeds from sensors that can be installed on existing armored platforms, reminiscent of the camera sensors that exist on air force craft, and allows commanders, gunners or drivers to look in any direction from inside their armored vehicle.

The helmet also links up to a military’s command and control system network, and can be used to feed the crew information on the location of hostile forces – marked in red – and friendly units – marked in blue. This appears within the image that displays their vehicle’s environment, and the military can transmit “everything it knows on the enemy” directly to the helmet’s display, a company source said.

“This is a vital advantage when it comes to carrying out missions that include joint forces and sustained high-intensity operations,” Elbit said.

A tank commander or driver would receive full color imagery of his battle environment, and could also receive live video feeds directly to the helmet from drones overhead, or from other platforms in his vicinity.

APC crews could use the helmet, which plugs into the vehicle’s computer system, to aim weapons toward threats.

“Look, lock and launch first – that is what this is designed to do,” the source said. The helmet represents an import of air force technology to ground forces products, he added.

The helmet “collects information from different digital sources within and around the vehicle and tracks the positions of various features of interest, ranging from a single person, standing or crawling, several meters near the vehicle, to a moving vehicle located 150 to 300 meters away,” according to Elbit.

This shortens the sensor- to-shooter cycle to a significant degree.

Eran Golan, Business Unit manager for Merkava Tanks and armored fighting vehicles at Elbit, said a camera could be installed on a mast, or spread out across the armored vehicle. “The vehicle becomes transparent. The system knows where targets are. With the press of a button, weapon systems can be directed toward the targets.”

The helmet will be displayed for the first time at the Eurosatory defense exhibition in Paris from June 13 to 17.

Elbit also unveiled a mobile electro-optical lookout system called SupervisIR, which uses day and night sensors to generate a picture in high resolution of a wide-area (90-degree horizontal and 12.5-degree vertical), which is equivalent to approximately 150 thermal imagers placed side by side.

SupervisIR creates a “panoramic view” of a very large area, and automatically monitors it, alerting operators to “sectors of interest” when it detects suspicious movements, a company source said.

The IDF has also shown interest in purchasing this system.