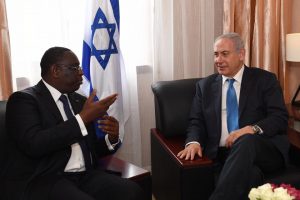 Earlier this year, in an act of retribution against the countries that co-sponsored a United Nations Security Council resolution in December condemning the construction of Jewish settlements, Israel permanently downgraded its diplomatic ties with New Zealand and Senegal.

Following the passing of the resolution, called Resolution 2334, Netanyahu recalled ambassadors who had resided in both respective countries.

Netanyahu met with Sall on the sidelines of the ECOWAS conference in Liberia. Israel announced that it will immediately return the Israeli ambassador to Senegal back to his post and, in exchange, Senegal will support Israel’s application to be an observer at the European Union.

The states also announced they would renew a joint project between them which were put on hold after Senegal supported UN Resolution 2334. The states also agreed upon cooperation on agriculture projects and security.

Netanyahu also invited Senegal’s foreign minister to plan his scheduled trip Israel which was put on hold due to the diplomatic crisis.

The vote on UN Resolution 2334 on December 23 was scheduled at the request of four countries including Malaysia and Venezuela, as well as New Zealand and Senegal.