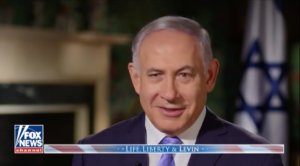 Levin’s radio show is one of the top ten most popular radio programs in the US, with a weekly audience in excess of 11 million listeners. Levin is also the host of the Life, Liberty & Levin show on Fox News and LevinTV on the Conservative Review’s CRTV.

“We had Barack Obama use the State Department and American tax dollars to try and defeat Benjamin Netanyahu last time around,” Levin said. “We have the New York Times that has a daily drumbeat of anti-Israel, anti-Netanyahu stories by cretins, malcontents, miscreants, and that sort of crowd.”

The conservative talk-radio host went on not only to endorse Netanyahu, but said the Israeli leader had been the “most important leader” of the free world during the Obama administration.

“I just want to encourage the Israelis as strongly as I know how to vote for Benjamin Netanyahu and his Likud Party. Benjamin Netanyahu has not only been a great leader for Israel but during the time when Obama was President he was the most important leader of the free world.”

Levin went on to deride Netanyahu’s opponents – without naming them – as “political munchkins”, while comparing the Israeli premier to popular conservative leaders of the 1980s including Ronald Reagan and Margaret Thatcher.

“I cannot believe that the people of Israel having witnessed these incredibly historic events, having benefitted from the rational, free market policies of their Prime Minister and his government, having benefited from the security decisions of their Prime Minister and his government, that they would dislodge him from office. It would be like the British after World War II voting out Winston Churchill. Benjamin Netanyahu is, for lack of a better parallel, Israel’s Winston Churchill, Israel’s Ronald Reagan, Israel’s Margaret Thatcher, if you get my drift in terms of policies. He is a strong statesman surrounded by little, political munchkins.”

Last year, Levin hosted Netanyahu on Life, Liberty & Levin on Fox News for a 14-minute sit-down interview which focused on the Iranian threat, the relocation of the US embassy, and even Netanyahu’s relationship with 2012 Republican presidential candidate Mitt Romney.