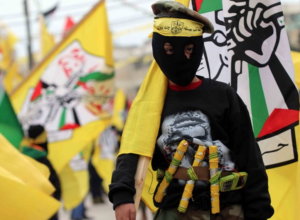 Ofer Gentleman, Prime Minister Benjamin Netanyahu’s official spokesman to the Arab media, called the event a glorification of terrorism aimed at encouraging a new generation of Palestinian youth to join the violence.

It was notable that while the Bethlehem-based Palestinian news agency Ma’an covered the parade extensively on its Arabic-language website, the story was completely missing from its English-language website, which is widely followed by the international press.

Yet another example of the Palestinians sending out completely different messages in Arabic and English, just as the parade itself was further evidence that Israel has no Palestinian peace partner at the governmental level.

See more coverage at The BLAZE