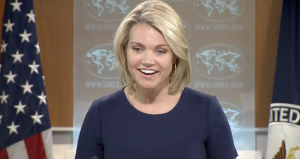 While every administration over the past half a century, from Lyndon Johnson through Barack Obama, has chastised Israel for the construction of civilian housing units in Judea and Samaria, the Trump White House made no comment as the first housing permits issued since the January 20th inauguration were approved.

Reporters took note of the administration’s silence on the issue during a State Department press conference Thursday.

“We are aware of the announcement that the government made about 2,500 units in the West Bank. President Trump has talked about this consistently, and he has said, in his opinion, unrestrained settlement activity does not help advance the peace process. He’s been pretty clear about that. It doesn’t help the prospect for peace. That is something that the Israeli-Palestinian peace process is important to this administration, and they will keep promoting that.”

“I’m not aware of any statements, but I’m just not sure what might come up on it.”