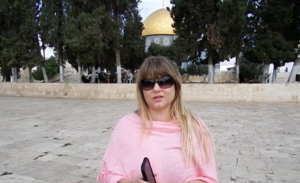 Christian pro-Israel activist, Jane Kiel from Denmark, records being kicked off of the Temple Mount by Waqf guards who ‘waited 2 months’ to bully her.

Jane Kiel, a Danish pro-Israel activist better known as “Jerusalem Jane,” managed to record the blatant discrimination she faced Wednesday morning at the Temple Mount, where Jordanian Waqf guards kicked her off the site for two months ago singing a prayer there.

Kiel told Arutz Sheva she has complained to the police and contacted governmental ministers, but that her hopes are low that any action will be taken over the harassment she suffered.

The incident occurred around 9:30 a.m., when she and a friend were simply visiting the holiest site in Judaism before a Waqf guard suddenly approached her and called her by name.

The guard can be seen in video from the incident telling her that the entire Mount is a “mosque,” and saying that all prayer is illegal for non-Muslims in the entire compound. He played a recording of her singing the Shema Yisrael prayer at the Mount two months ago, and said “we waited two months for you.”

Demanding to see her ring with Hebrew writing on it, he termed her a “born again believer,” and said “the only religious who can come here are Muslims, no Christians or Jews.”

The statement is a blatant violation of Israeli freedom of movement laws, not to mention the freedom of worship laws that the government has allowed the Waqf to breach for non-Muslims at the site. Prime Minister Binyamin Netanyahu recently agreed to post video cameras on the Mount to help the Waqf ban Jews from exercising their right to pray at their holiest site.

Kiel later posted a video on her official Facebook page describing the encounter, which can be seen by clicking the image below.

After saying religious Christians and Jews are forbidden from the site, the guard is heard in video from the incident claiming to be Jordanian police, but he initially refused to show an identity card before eventually presenting what he claimed to be an ID card.

He then forced the two to delete their video from the incident and threatened to arrest them if they didn’t immediately leave the Temple Mount.

After saying he was taking Kiel and her friend to the Israeli police, the guard took them to a man he called the Waqf “boss” of the Temple Mount, who ordered her to leave.

Kiel reported that this is in fact the second time she was expelled from the Mount; in a previous visit, Waqf officials took her phone and deleted all her videos and photos.

“The world needs to know”

Speaking to Arutz Sheva, she revealed “I filed a complaint to the police at Jaffa (Yafo) gate today, as I also did on that day when the Waqf guard took my phone and deleted all the messages and videos I had made.”

“They police are nice when I am in the office but they cant really do much,” she noted.

Kiel has received countless death threats over the last ten months for documenting Muslim harassment of Jewish visitors to the holy site. She added that she has opened a complaint file with the police over the threats, but has yet to see any action taken on the matter.

The activist added that she has sent letters to Internal Security Minister Gilad Erdan and Tourism Minister Yariv Levin describing the incidents.

She sent the letters “because I want them to be able to show to world what is going on. That is why I am doing all of this, the world needs to know what is going on towards Jewish people, and Christians visiting The Temple Mount.”

Kiel noted that a month ago the Quds News Network, reportedly affiliated with Islamic Jihad, condemned her activities in an article, and that the Waqf guard pulled up the article on his phone as he kicked her off the Mount.

On Kiel’s website, she describes herself as “a Danish woman with a heart for the people of Israel. Many years ago, I came here with my mother, and since then, Israel is inseparable from my heart.”

“I declare this statement as Ruth did for myself and the people of Israel: ‘I will go where you go, I will stay where you stay: YOUR PEOPLE SHALL BE MY PEOPLE, and your God my God,'” she wrote.