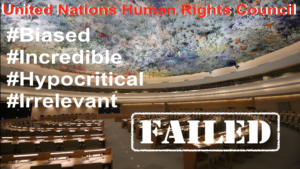 Simply put, with this resolution, this Council has reached a new height of hypocrisy, and the lowest standards of credibility!

The UNHRC’s decision instructs the commission to investigate “individual criminals” who were responsible for the crimes, including commanders. In other words, the commission will seek to investigate IDF soldiers and commanders who carried out intentional fire against the protesters. The council members don’t just want to launch an investigation, but stress under article 5 of the resolution that the goal is to probe IDF commanders—something Israel cannot allow.

The Human Rights Council passed the resolution despite Hamas’s admission that 50 of the 61 killed in the clashes on Monday were members of the terror group.

This isn’t the first time the council decides to establish an inquiry commission or a fact-finding team. Israel boycotted previous commissions as well: The Schabas Commission to investigate Operation Protective Edge and the Goldstone Commission that investigated Operation Cast Lead—both were denied entry to Israel. William Schabas, who probed Protective Edge, had to work from Jordan.

The report by the commission of inquiry will have no practical ramifications on the ground. The damage will be mostly diplomatic and to Israel’s reputation. But this time Israel’s starting point is better than in the previous two commissions. Generally, the world accepts the Israeli narrative that Hamas is behind the protests and sends its own demonstrators to bring down the border fence—something no nation in the world would’ve allowed.

Israel’s main problem is mostly in PR. How can it explain the high death toll to the world? Over 100 dead and thousands wounded on the Palestinian side, compared to zero casualties on the Israeli side. So even though the report will have no practical ramifications, it could serve as a legal basis for lawsuits against IDF officers and Israeli officials at the International Criminal Court at The Hague. But similar suits were filed in the past and have yet to be examined.

Israel is not a member of the UN Human Rights Council, but its ally the United States is, and it too has been considering for a while now to quit the international body. But Israel actually expects the Americans to stay in the UNHRC in the foreseeable future, at least until the next High Commissioner is elected to replace Prince Zeid bin Ra’ad Zeid al-Hussein, so Washington could influence the selection of his successor.

Furthermore, after the commission submits its report to the Human Rights Council, the member states still need to approve and adopt it—and the United States’ presence is particularly important to Israel to balance the resolutions expected down the road.

US Ambassador to the UN, Nikki Haley, slammed the council over the decision to set up a commission of inquiry.

“At a time when Venezuela lurches toward dictatorship, Iran imprisons thousands of political opponents, and ethnic cleansing has taken place in Burma, the UN’s so-called Human Rights Council has decided to launch an investigation into a democratic country’s legitimate defense of its own border against terrorist attacks,” Haley said. “This is another shameful day for human rights.”

The countries that disappointed

Israel will have to decide in the coming weeks how to response to the vote of several countries—including members of the European Union—that voted in favor of the commission of inquiry. Israel has made quite a bit of effort to convince the seven European members of the council to vote against the resolution and thus undermine its legitimacy. Spain, Belgium and Slovenia have all decided to vote in favor of the resolution despite having tried and failed to add a clause recognizing Israel’s right of self-defense.It is safe to assume the disappointing vote will not go unanswered. Jerusalem is considering a harsh response, such as summoning the ambassadors of the countries that voted in favor the resolution for a reprimand.

UNHRC vote results for an independent investigation into the killing of Palestinian protesters in the Gaza Strip, West Bank and Jerusalem.

Germany and Britain disappointed Israel just as much by opting to abstain rather than oppose the resolution, which Israel considers to be disgraceful. It is likely the Germans are seeking to avoid any additional division in the EU in the midst of the Brexit crisis. The British ambassador did propose to form an Israeli commission of inquiry with international representatives, but his proposal was rejected. Three additional European countries abstained—Hungary, Slovakia and Croatia.

There were some achievements

There was, however, some comfort in the choice made by four African countries to abstain from the vote—Ethiopia, Rwanda, Togo and Kenya—which is considered an achievement of Israeli diplomacy, as do the abstentions of Japan, South Korea, Georgia and Panama—whose president is currently visiting Israel.

Ukraine, which in December 2016 voted in favor of the UN Security Council’s Resolution 2334 against Israeli settlements, sparking a diplomatic crisis with Israel, chose this time to rectify the damage by missing the vote along with Mongolia. Australia, a country very friendly towards Israel, also deserves praise for choosing to vote against the resolution along with the UnitedStates.

But this isn’t the only trouble for Israel on the international stage these days. Kuwait has submitted a draft resolution to the UN Security Council calling for an international force to be deployed to the Gaza Strip to protect the Palestinians, and the council is expected to discuss the matter on Monday. Even if the Kuwaiti are able to get the nine required votes to pass a resolution in the council—which is not a sure thing—the United States will veto it.In such a case, Kuwait could choose to take the resolution to the UN General Assembly, where it has an automatic majority to pass any resolution it wants. Luckily for Israel, the General Assembly has no way of enforcing the anti-Israeli decision it approves.

The bottom line is that while the UNHRC resolution was not pleasant for Israel, it’s not the end of the world. Israel shouldn’t panic in light of the impressive backing from the US and the relatively small diplomatic damage from the events on the Gaza border. The crisis with Turkey was to be expected, mostly due to the upcoming elections in which Turkish President Erdoğan wants to reposition himself as the leader of a regional power.

South Africa was the only country apart from Turkey to recall its ambassador for consultations. But South Africa has no real influence, and it is not considered an “important country.” If after 60 dead on the Gaza border only two Israeli ambassadors were summoned for a reprimand (the ambassador to Ireland and the ambassador to Belgium and Luxembourg), Israel can breathe easy.
View original Ynet publication at:
https://www.ynetnews.com/articles/0,7340,L-5264846,00.html
Category: Israel News, Video's worth Viewing | Tags: Col. Richard Kemp, investigation, March of Return, UNHRC