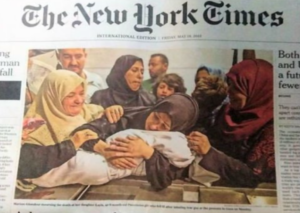 Twenty-year-old Mohammed Omar was captured by Israeli forces late last month while taking part in a three-man infiltration of southern Israel. The Fatah-affiliated activists managed to cut through the Gaza security fence and tried to set fire to an unmanned IDF post. Omar and one other cell member were nabbed, while the third managed to escape back into Gaza.

During his interrogation, Omar detailed the planned attack, and also volunteered that he was related to Layla Ghandour.

So, if the ‘Palestinian cause’ was just and true, Why the need for ‘Pallywood’, the constant lies & deceptions?

According to his indictment filed by the Southern District Attorney on Thursday, Omar told investigators that he was present at the mass Gaza border demonstration on May 14, the day Layla died.

Mother of 9-month-old Layla Ghandour. Innuendo is enough for the BBC to demonize Israel.

Omar reported receiving a phone call from his mother informing him that his baby cousin had passed away. When he arrived home, Omar was told that Layla had succumbed to the same blood disease that had killed her brother less than a year earlier.

It was at that point, Omar recounted, that Hamas leader Yahya Sinwar got in touch with the family and offered them NIS 8,000 ($2,200) to tell reporters that Layla had died from inhaling Israeli teargas.

This type of deception is not uncommon in the Palestinians’ portrayal of Israeli defensive and counter-terrorism measures. Nor is the mainstream international media’s willingness to publish each and every unsubstantiated Palestinian claim against Israel absent even the most rudimentary fact-checking.

As the above video notes, Hamas had already removed Layla from the official Gaza border death toll at the end of last month, but not until longe after the damage to Israel’s reputation had been done.