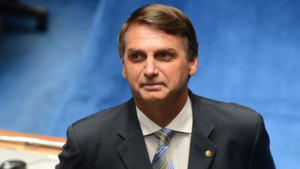 In closed talks with Bolsonaro during a historic visit to the South American country in late December, the Brazilian leader reiterated to Prime Minister Benjamin Netanyahu his intentions of relocating the Brazilian Embassy to Jerusalem.

It now appears Bolsonaro will officially recognize Jerusalem as Israel’s capital during his expected visit.

Bolsonaro and many of his top aides have repeatedly indicated that Brazil would soon relocate its embassy in Israel to Jerusalem. Since his election victory, however, Bolsonaro has come under pressure from powerful backers in the agricultural sector – who fear the move could harm their halal meat sales in Arab countries – to abandon the embassy relocation idea.

The Arab League has warned Bolsonaro that moving the embassy to Jerusalem would be a setback for relations with Arab countries.

Such a move by Bolsonaro would be a sharp shift in Brazilian foreign policy, just as it was for the United States when President Donald Trump relocated the U.S. Embassy to Jerusalem in May.

Brazil has traditionally backed a two-state solution to the Israeli-Palestinian conflict, and the relocation of the embassy to Jerusalem, parts of which the Palestinians envision as the capital of a future state, would be seen as an affront.