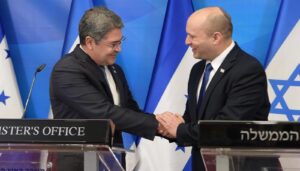 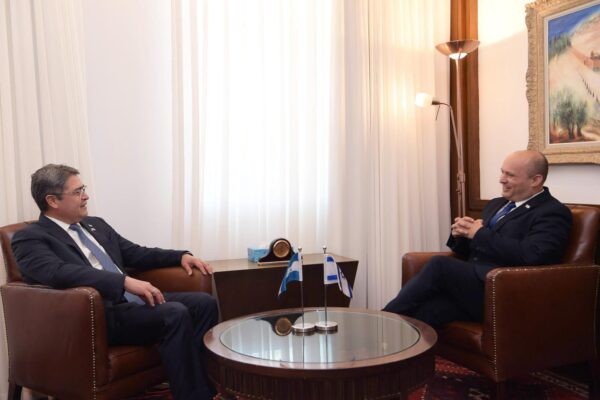 Thank you very much.

Prime Minister Naftali Bennett, thank you for honoring us with your presence today.

Foreign Minister Yair Lapid, thank you for all your support. Let me express my appreciation for the superb team at the Israeli Foreign Ministry who we have had the pleasure of working with. Also let me recognize the Israeli ambassador to Honduras, Eldad Golan who is here with us today. And the Honduran Ambassador in Jerusalem, Mario Castillo, and Miguel Munoz. And especially our Foreign Minister Lisandro Rosales.

Honored guests. Thank you all.

I am here today in the eternal capital of Israel to recognize what has been true for thousands of years and that is found in holy scripture.

I am here today in the eternal capital of Israel to inaugurate the Embassy of Honduras in Jerusalem.

A friend of mine likes to say that the word “coincidence” cannot be found anywhere in the Bible. Remarkably, today also marks the 30th anniversary of when I first came to Jerusalem in 1991. I was in Israel at the invitation of MASHAV. Three decades ago, Israel selected me to participate in their leadership development program, an experience that changed my life and that I wish to honor today.

After I took office as President in 2014, Honduras shifted her UN voting posture and became one of the two countries in Latin America, and one of the five in the world, to most often abstain from resolutions opposed by Israel.

In December of 2017, when the United Nations passed a resolution opposing the move of the US embassy to Jerusalem, Honduras was one of just 9 votes against that resolution. 128 countries voted on the other side, against Israel.

The following year, when the normal rotation at the UN meant that Honduras would have the presidency of the UN General Assembly, the anti-Israel bloc promoted a rival candidacy. Honduras was defeated, and it was by the same number of votes as were against Israel on the Jerusalem resolution, 128 votes. Did I mention that the word “coincidence” cannot be found anywhere in the Bible?

In March of 2019, I spoke at the conference of AIPAC in Washington, where I announced that Honduras recognized the undivided city of Jerusalem as the capital of Israel, and that we would open an official diplomatic office in Jerusalem, and that this would be the first step in a two-step process to culminate in the full and reciprocal exchange of embassies to be located in the capital cities of the two countries. I appreciate the support from the leaders at AIPAC, my friends Howard Kohr and Betsy Bernskorn.

A few months after that, I flew to Israel. I came here to Jerusalem, and on September 1st of 2019, we opened the official mission of Honduras in the capital of Israel.

After that I spoke before the conference of the Israeli American Council in Florida. There, in front of Sheldon Adelson, may he rest in peace, and Dr. Miriam Adelson, I was happy to declare that Honduras had done what it promised, and that day I announced that we were ready for the next and final step: the opening of the Honduran embassy in Jerusalem, to be followed, reciprocally, by the re-opening of the Israeli embassy in Tegucigalpa, which had been closed years earlier. That is what we are doing here today. As we promised.

I want to recognize that with us here today are my friends Naty Saidoff, the chairman of IAC and Shawn Evenhaim who was the IAC chairman when I made the announcement.

And I especially want to express appreciation to Dr. Miriam Adelson who so generously provided the use of a beautiful airplane because she wanted to make it possible for many more Honduran leaders to be here today, including important faith leaders who represent millions of Hondurans. Thank you, and we honor the memory of Sheldon Adelson.

In view of the deadly attacks that Israel has suffered this year and the continuing threats, let me reaffirm what I said at the Israeli American Council: “Honduras stands with Israel because it’s the right thing to do”. “If Israel does not survive, then humanity does not survive.”

I can say without hesitation that the friendship of Honduras with Israel has been a blessing for my country. Technical cooperation in security. Emergency recovery assistance after we were hit last year by two very destructive hurricanes. Earlier this year, the donation of COVID19 vaccines. Thank you, Israel.

Let me give one dramatic example:

Israeli technical cooperation in security has helped Honduras to save tens of thousands of lives. Before I was elected President, Honduras had the highest homicide rate in the world. The violence was driven by drug trafficking because our key institutions were penetrated by narcos and organized crime.

— To clean it up, we purged almost half of the police force and most of the top officials.

— We launched a tough extradition program and a strong partnership with the US Drug Enforcement Administration and the anti-narcotics forces of SOUTHCOM.

— What have been the results?

— According to official US statistics, under my government, Honduras reduced the transit of cocaine headed to North America by an almost unprecedented 95%. Yes, you heard that right, we cut drug trafficking through Honduras by 95%, that is the official US government data.

— To do this, we broke up the major drug cartels by sending dozens of narcotraffickers into US custody. Many of these drug lords face sentences of life imprisonment in the United States.

Now, Israel knows well that the international news is not always accurate, and that hurts Israel. The same thing is done to Honduras.

A lot of the dramatic news narratives about my country are in fact describing what existed before my government produced these transformative results, and often based on the false testimonies of the violent drug lords that we defeated, who are sitting in US prisons and seeking revenge.

The international news makes it sound like Honduras is still a very violent country. But that is no longer true. By defeating the drug lords, we cut the homicide rate by more than half, by 60%. And that has saved tens of thousands of lives.

Today our major cities are safer than various major cities in the United States. We appreciate the help we have received from Israel.

On behalf of the people of Honduras, I am here to say, Thank You.

So, I invite you to please come to Honduras. Come as tourists. Come to invest. The opportunities are great. The coffee is delicious. The country is beautiful. The people are friendly. You will be warmly welcomed.

As you may know, this is an election year in Honduras.

It is my sincere wish that the next President of Honduras, from whatever party that may be, will maintain and build upon the close relationship with Israel. The Embassy of Honduras in Jerusalem must be eternal, and not affected by changes of government because the Honduran flag in Jerusalem represents the unbreakable friendship between the people of our two countries.

After I leave office in January of 2022, I will continue to use my voice in support of Israel, both inside of Honduras and internationally.

We must work together against anti-semitism, often presented as anti-Zionism. And we must resist the efforts to isolate or boycott Israel, the BDS movement, and I am looking at what can be done.

But most of all I am very optimistic, especially about the great potential in Latin America for strong alliances with Israel. Although there are political movements in Latin America that oppose forming or maintaining the special relationship with Israel, and some that are openly hostile, the majority of the people love Israel and want to continue to build and deepen this relationship.

And this Embassy and this President, together with the people of Honduras are committed to doing that. As I reflect today on the last thirty years, I see no limit on how much good can be accomplished in the next thirty years.

Thank you all, and God bless you.