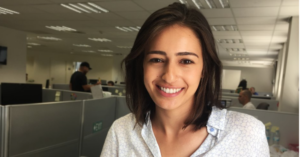 Meanwhile, 300 million people around the globe are watching the Israeli Arab who loves the Jewish Nation as she hosts the Eurovision Song Contest from Tel-Aviv.

Lucy Ayoub was born in Haifa. Her paternal grandmother was the daughter of Palestinian refugees who fled to Lebanon during the 1948 Arab-Israeli War and left Lucy in a convent in Israel. A wealthy Arab Christian lady adopted Lucy, who when she grew up enlisted in the Israel Defense Forces and served for two years as a flight simulator instructor in the Air Force.

Since 2016, Lucy, who speaks fluent Arabic and Hebrew, studies philosophy, politics, economics, and law at Tel Aviv University. In 2017, she joined the Israel Public Broadcasting Corporation (IPB) and started writing and submitting videos. Lucy also hosts a weekly cultural program on the radio and the Culture Club on Kan 11, the IPB television station.

But, alas, the media would rather cover Muslim Arab troublemakers like Hanin Zoabi, who leads Israeli Arabs to demonstrate against recruitment of Arabs in the IDF, including Arabs from the Christian community, rejects any historical connection between the Jews and the Mount Temple, and says that Zionism is racism.

It is time the world saw the other side of Israel, the young generation of Arabs who are going through a process of Israelization and becoming an integral part of Israeli society.

Thank you, Lucy, for being such a great host and showing them a better way.