Gilad Veturi, 16,  died after collapsing at the finish line of a 60 meter sprint, donated his organs to save the lives of 6 people & aid others see again.

By JUDY SIEGEL-ITZKOVICH
Nine organs were donated on Sunday by the family of Gilad Veturi, a 16-year-old student at Ilan Ramon High School in Hod Hasharon, after he collapsed and during running practice and died two days later. 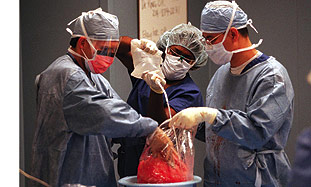 His lifesaving organs were transplanted into six patients, while his corneas were saved for transplant at a later date.

The teenager, who collapsed Thursday at the finish line of a 60-meter sprint, was known to be an excellent athlete who was in good health. Doctors at Petah Tikva’s Rabin Medical Center- Beilinson Campus where he was taken to in critical condition were unable to say whether he had suffered from a brain aneurysm or an irregular heartbeat that caused the organ to fail suddenly.

Veturi was declared dead on Shabbat. He is survived by his parents and two older brothers.

According to Israel Transplant, Veturi’s heart was given to a 56-year-old man who had an ADI organ donation card and was thus jumped ahead of the queue; his lungs were transplanted into two men ages 63 and 67; and his liver was given to a 64-year-old woman. All of the operations took place at Beilinson.

Meanwhile, one kidney and Veturi’s pancreas were given to a 36-year-old woman who had an ADI card; the other kidney went to a 24-year-old woman, also with an ADI card. Both operations took place at Tel Aviv’s Sourasky Medical Center; the corneas are soon to be transplanted at Beilinson.

Israel Transplant director Dr. Tamar Ashkenazi said that “Gilad’s parents represent the beautiful Israel. They are people who give, who are ready to help others and who, at a time of distress and terrible personal tragedy, are able to think about saving lives and giving organs.”