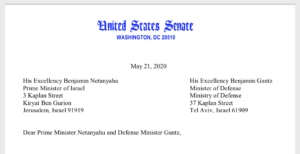 The letter, sent on Thursday, is signed by 19 Senate Democrats, led by Senator Chris Murphy (D-CT), Senator Tim Kaine (D-VA) and Senator Chris Van Hollen (D-MD). Senators Elizabeth Warren and Bernie Sanders, who sought the Democratic presidential nomination but stepped down from the race, are signed to the letter as well.

In the letter, the senators warned that such a move would mark a dramatic reversal of decades of shared understandings between the United States, Israel, the Palestinians and the international community, and would impact Israel’s future, placing its security and democracy at risk.

“A deep commitment to Israel’s security and a shared set of democratic values are foundational elements of the close relationship between our countries. We are therefore concerned that unilateral annexation puts both Israel’s security and democracy at risk. Annexation would betray our shared democratic values by denying Palestinians’ right to self-determination in a viable, sovereign, independent and contiguous state. It could bring an end to Palestinian security cooperation with Israel, directly threatening the security of the Israeli people, and endanger Israel’s crucial peace agreement with Jordan,” the senators wrote.

“As friends and supporters of Israel, we caution you against taking unilateral steps that would fray our unique bonds, imperil Israel’s future and place out of reach the prospect of a lasting peace. If you move forward with unilateral annexation, we would not support that action,” they added. “This is consistent with long-standing American policy opposing unilateral actions by either party to the conflict. Pursuit of a viable, negotiated two state solution is essential to ensuring our shared democratic values and lasting bipartisan support for Israel in Congress.”

The letter follows the coalition agreement between Netanyahu and Gantz, which stipulates that the government can apply sovereignty over Judea and Samaria this coming July.

A US State Department official said last month the US would be ready to recognize an Israeli application of sovereignty over Judea and Samaria.

US Secretary of State Mike Pompeo was non-committal on the timetable for sovereignty in an interview published in the Israel Hayom newspaper last week, saying that the decision to apply sovereignty is Israel’s to make.

Later, State Department spokeswoman Morgan Ortagus said that if Israel applies sovereignty over Judea and Samaria, the move should be part of discussions between Israelis and Palestinian Arabs on fulfilling President Donald Trump’s peace plan.