The 3 young Israelis were hailed as heroes by the parents who watched helplessly from shore as their children were being pulled out to sea.

By JPOST.COM STAFF
Three Israeli surfers went to the aid of eight children struggling in the waters off Hawaii on Saturday, Channel 2 television reported, after huge waves began surging toward the coast. The three – Tzvika  Elias, Yair Naftali and Gabi Liptz – were hailed as heroes by the children’s parents. 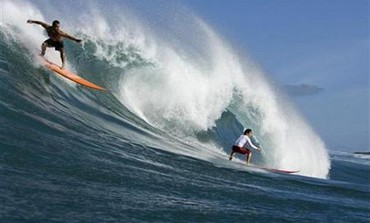 “We had gone to a remote beach half an hour from Honolulu,” 30-year-old Elias, who lives in New York, told Channel 2. “The waves there were high, huge breakers about four meters high, and as the minutes passed, the waves got stronger and even higher.”

Elias and his friends then saw a group of children aged between 12 and 14 who had gotten into difficulties in the water. “As we neared the children we saw that they had been swept out to sea and were being pounded by the huge waves,” he told the television. “On the shoreline we saw the mothers watching powerless as their children were drowning in front of them. Yair and I, who were at that point together in the water, tried with all our might to reach the group to try to get them away from the strong waves.”

The conditions worsened, but the Israelis did not give up, Channel 2 said. “Every time we managed to grab hold of one child, he was immediately swept away again,” Elias said. “At a certain point, Gabi, who had already left the water, joined our attempts and managed to catch hold of some of the kids and get them safely to shore.”

Yair Naftali, who lives in Honolulu, told the television that it took 40 exhausting minutes to rescue all of the children. “In the distance we saw the local emergency services arriving to help with the rescue, but because the waves were so high, all that they could do was watch as we tried to get the children out of the water,” Naftali said.