Baby among the 3 wounded when car hits people waiting for Light Rail at the Ammunition Hill station in Israel’s capital.

Three people were wounded near Jerusalem’s Light Rail Ammunition Hill station in a possible terror attack. Initial reports said the train had derailed but the recent reports say a car attempted to run over people waiting at the station. 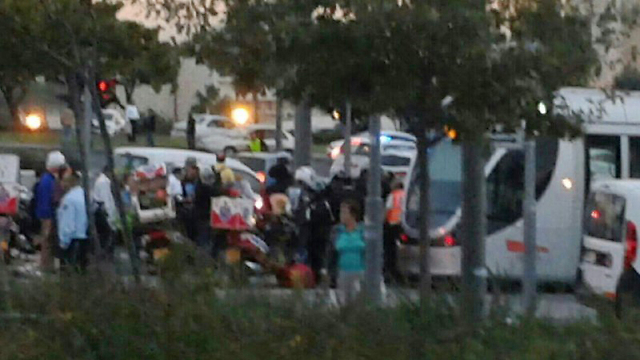 The car’s driver attempted to flee the scene but was shot, apparently by the police.

According to MDA paramedics at 5:54 pm they received a report saying that a car hit a number of pedestrians near the Ammunition Hill station. Three people were wounded, including a baby, who was in serious condition together with another man; another person was lightly wounded.

This is not the first time the capital has seen such attacks, and recent weeks have seen a number incidents on the train.

In August, a pedestrian was killed and six other people were wounded when a terrorist went on the rampage in an industrial digger in central Jerusalem.

On July 22, three weeks after the previous Jerusalem bulldozer attack, another tractor driver went on a rampage on the capital’s King David Street on Tuesday afternoon. The police reported that the terrorist was shot dead and that at least 18 people were injured in the incident.

On July 2, three women were killed and at least 30 more people were injured when a bulldozer driven by a Palestinian resident of east Jerusalem trampled over pedestrians and vehicles and plowed into two buses in downtown Jerusalem.

The driver, who reportedly had a criminal record and was the holder of an Israeli (blue) identification card, was shot dead by a SWAT officer near the old Shaare Zedek Medical Center.