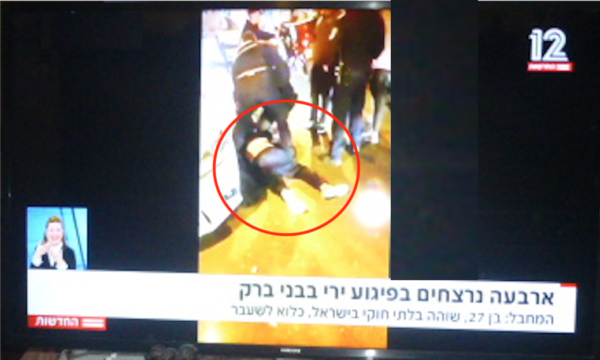 Tensions in the country are running high following two previous Palestinian terror attacks in the past week; the first in Be’er Sheva in which four people were killed, and the second in Hadera, in which two others were murdered.

At least five people were killed and another was critically wounded in a suspected terror attack in the city of Bnei Brak, just east of Tel Aviv.

Police said the gunman was a 27-year-old Palestinian Diaa Hamarsha, an Islamic Jihad military operative, from Jenin area in the West Bank. He was jailed in an Israeli prison in the past and worked in Bnei Brak illegally. The gunman was apparently equipped with an M-16 automatic rifle. He was shot and killed at the scene.

A Magen David Adom (MDA) paramedic said a suspected terrorist and a civilian were found shot dead on Herzl Street in Bnei Brak and one person was found shot dead inside a car and two others were killed on Bialik Street, where another person was also wounded, in the predominantly ultra-Orthodox city.

MDA paramedic Lipa Hirsch, who treated the wounded, said: “On Herzl Street we saw a 30-year-old man lying unconscious. He was out of breath and without a pulse with gunshot wounds. Unfortunately, we had to determine his death”.

“About 100 meters away, further down the street, we saw a 40-year-old man unconscious with gunshot wounds to his body. Another MDA team that arrived at the scene provided him with medical treatment and evacuated him to Rabin Medical Center in critical condition.”

Prime Minister Naftali Bennett said he will conduct a security assessment with senior members of the defense establishment in the wake of the attack. 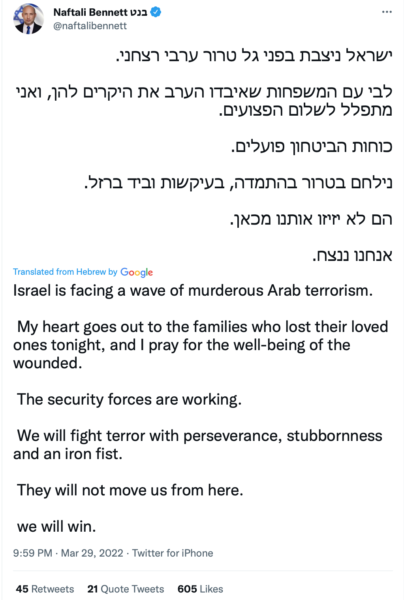 Tensions in the country are running high following two terror attacks in the past week, one in Be’er Sheva in which four people were killed, and the other in Hadera, in which two people lost their lives.