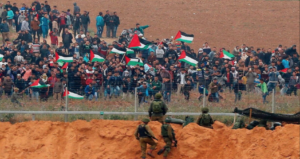 An estimated 10,000 Gazans showed up along the border with Israel to burn tires, damage security fence and infiltrate into Israel, forcing the IDF to employ riot-control techniques or firing warning shots before snipers took aim at the inciting ringleaders.
– Another 4 fires break out in southern Israel after Hamas incendiary kites crossed over the border.

At least four Palestinians were killed in Naksa Day protests on the Gaza border on Friday afternoon as some 10,000 Palestinians assembled along the security fence and began burning tires, hurling stones and flying incendiary kites into Israeli towns, prompting IDF snipers to open fire at violent ringleaders.

Ziad al-Bareem was shot dead east of Khan Yunis in southern Gaza, while Nabil Abu Daraba, 26, was shot dead in the north of the territory, the health ministry in Gaza said. Witnesses said one of the men was shot close to the fence where he was throwing stones at soldiers.

At least 618 were wounded, with more than 100 of them from IDF gunfire, according to the Palestinians. Seven of the wounded were in serious condition.

The IDF said protesters had launched dozens of kites and balloons with explosives toward Israel. It also said a number of “explosive devices and a grenade” were hurled during the protests and later said the military post had been struck by gunfire in the northern Gaza Strip on Friday evening.

“At the expense of the people of Gaza, the Hamas terrorist organization continues using terror in order to damage security infrastructure and harm security forces,” the IDF noted, adding that troops had been reinforced along the border.

After Muslim noon prayers Friday, thousands of Gaza residents began streaming toward five protest tent camps that had been erected more than two months ago, each several hundred meters (yards) from Gaza’s perimeter fence. From there, smaller groups walked closer to the fence.

IDF forces began by employing riot-dispersal measures against the protesters, most of whom initially congregated at the southern end of the border fence.

Soon after, the soldiers began firing warning shots into the air after the protesters attempted to damage the security fence.

Identifying instigators of the violence, snipers eventually opened fire as protesters attempted to vandalize the fence in Khan Yunis and Jabalia in southern and northern Gaza respectively.

Among those wounded on Friday was Agence France Press photographer Mohammed Abed al-Baba and a 23-year-old man who was on life support after a tear gas canister penetrated his face, medical officials said.

Al-Baba, who has been working for AFP since 2000, said he was shot below the knee when he was about 200 meters from the border east of Jabalia in northern Gaza, wearing a “press” vest and a helmet.

Defense Minister Avigdor Lieberman wrote on Twitter, “The determination and professionalism of IDF soldiers on the Gaza border prove themselves. Despite the great efforts by Hamas and Iran, less and less terrorists are arriving at our border. Thank you, IDF soldiers, thanks to you we will win.”

The IDF’s Coordinator of Government Activities in the Territories (COGAT), Maj. Gen. Kamil Abu Rokon, wrote to Gaza residents on his Facebook page in Arabic, stressing Hamas was exploiting them and endangering their lives.

“Hamas is leading you to the chaos march and sending you to the border fence and risking your lives, while its leaders are at a safe place, monitoring the events from afar. Gaza residents – think for yourselves and don’t get dragged after the leadership that takes advantage of you,” Abu Rokon wrote.

One man with a bullhorn shouted, “America is the biggest evil.”

Protester Fadi Saleh said the frequent marches have helped revive sympathies in the Arab world for the Palestinians, but that more could be done. “We need real Arab support and solidarity with our cause,” said Saleh, a student of Arabic literature who wore a medical mask against the tear gas.

Seven Palestinians donned uniforms similar to those the Nazis forced Jewish prisoners and others to wear in concentration and extermination camps.

“We want to remind the world that the Israeli occupation is committing the same massacres that the Nazis committed,” Ahmed Abu Artima said.

Incendiary kites flown by the Gaza rioters into Israel caused blazes in four locations near the border.

“There is no such state called Israel that could have a capital called Jerusalem,” Hamas spokesman Fawzi Barhoum said, adding that the protests, which also demand an end to a grinding Israeli and Egyptian blockade on Gaza, would continue.

Military officials are expecting a large turnout, raising the likelihood of bloodshed in the protests, as Palestinians mark the displacements that accompanied Israel’s victory in the multi-front 1967 Six-Day War against neighboring Arab states.

Shortly before the protest started, the Lebanese news channel Al Mayadeen accused the Israel Air Force of dropping flares and other flammable materials on piles of tires in Gaza in order to render them unusable.

Hamas organizers of the protests—which this week have been dubbed “The March of the Million to Jerusalem”—are urging Gaza residents to head to the perimeter fence, despite the IDF dropping warning leaflets across the strip not to become “tools” of Hamas.

The call was issued through mosques and loudspeakers mounted on cars that toured Gaza neighborhoods Friday.

“The burning of the tents and the tires will not damage the motivation of the masses who will participate in the March of the Million and will continue to work for the lifting of the blockade,” a Hamas official said.