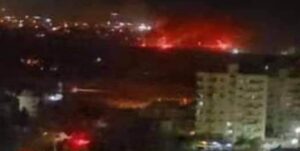 A large explosion was heard near the border between Israel and Lebanon during the strikes after a Syrian air defense missile was fired towards an Israeli aircraft in the area, according to Hezbollah-affiliated reporter Ali Shoeib.

BREAKING-
By the sound overhead, #IDF Jets return from yet another attack on #Iranian proxies in #Syria.

Over a minute after reentering Israeli airspace, a ground-to-air missile flies across the Galilee sky, falling into #Lebanon
– just so Syria can say they fired at #IAF jets. pic.twitter.com/jsGutC4X52

The missile reportedly fell near the Lebanese town of Houla, located west of Kiryat Shmona.

Images shared on social media reportedly from the Damascus area showed large fires, although it is as of yet unclear if they were caused by Israeli missiles or air defense missiles.

The strikes come after a series of cargo flights between Syria and Iran were reported over recent weeks.

The airstrikes are the ninth since January, with strikes attributed to Israel reported in eastern, southern and western Syria every month since the beginning of the year. 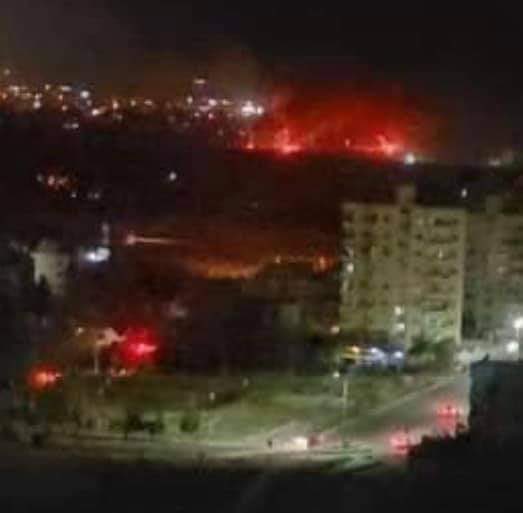 The Syrian Capital Voice site reported that the strikes targeted a weapons shipment that arrived at the Damascus International Airport earlier in the day. Explosions were reported after the strikes as well, according to the news source, which stated that they were likely caused by stored ammunition exploding.

The strikes also come as tensions rise in the region in light of a series of reported maritime attacks between Iran and Israel and as Iran meets with European and American officials to discuss a possible return to the Joint Comprehensive Plan of Action, the formal name for the nuclear agreement signed in 2015 between the Islamic Republic and world powers.

On Tuesday, the Iranian Saviz ship, affiliated with the Iranian Revolutionary Guards Corps, was allegedly attacked with an explosion lightly damaging the vessel. An American official told the New York Times that Israel told the US that it was responsible for the attack.

“The Saviz civilian ship was stationed in the Red Sea region and the Gulf of Aden to establish maritime security along the shipping lanes and to counter piracy,” a spokesman for the Iranian Foreign Ministry said on Wednesday. According to the ministry, no casualties were reported.

The United States Naval Institute reported last year that the Saviz, while officially listed as a merchant ship, was likely a covert IRGC forward base. Tasnim confirmed this on Tuesday, saying that the ship had been stationed in the Red Sea in recent years to support Iranian commandos escorting commercial vessels.

Dozens of strikes were reportedly carried out by Israel and Iran on each other’s maritime vessels in locations ranging from the Mediterranean Sea to the Persian Gulf in recent years, according to Maariv, The Jerusalem Post’s sister publication, and The Wall Street Journal.