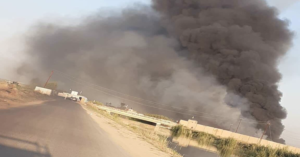 Iraqi officials told the Associated Press that the explosion destroyed a weapons depot belonging to an Iran-backed faction.

The incident is the latest in a series of mysterious explosions that have rocked Iran-backed positions across Iraq.

Most of the explosions have targeted installations belonging to the Popular Mobilization Forces, an Iran-backed umbrella group made up of Shi’ite militia outfits.

No one has claimed responsibility for Tuesday’s explosion. Residents in the area have blamed the explosions on drone attacks, others on faulty storage.

As a result, unauthorized flights throughout the country have been banned following an order last week from Iraqi Prime Minister Adel Abdul-Mahdi.