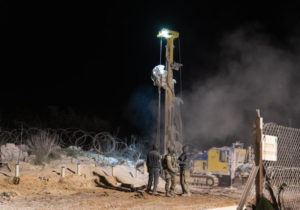 The IDF stated that it “holds the Lebanese Government accountable for the attack tunnels dug from Lebanese territory and for the consequences of this violation. This is another blatant violation of UN Resolution 1701 and of Israeli sovereignty.”

The IDF continues its operational efforts to expose and neutralize the attack tunnels as planned.