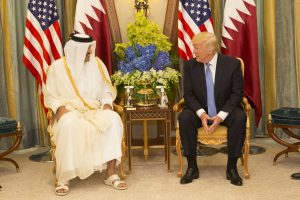 “It is clear to everyone, even in the Arab countries, that the real danger to the entire region is terrorism,” said Lieberman.

He added that Israel was open to cooperation in a global coalition against terrorism, reported Israeli media.

Israel has long faced resistance to its efforts to improve ties with Arab nations in the region because of the longstanding conflict with the Palestinians.

It has, however, recently seen increased behind-the-scenes cooperation with some Arab countries, particularly in their opposition to Iran and in the fight against jihadists in the region.

“There is no doubt that this opens very many possibilities of cooperation in the struggle against terror,” Lieberman told the Israeli parliament in a televised question-and-answer session.

“We saw the United States president visit Saudi Arabia and he spoke first and foremost about a coalition against terror,” he said in a reference to Donald Trump’s trip last month.

“The state of Israel is really open to cooperation. The ball at the moment is with the other side,” he added.

Saudi Arabia said in a statement its measures were the result of “gross violations committed by authorities in Qatar”, accusing Doha of harboring “terrorist and sectarian groups that aim to destabilize the region, including the Muslim Brotherhood, Daesh (IS) and Al-Qaeda”.

On Monday, Saudi Arabia, Egypt, the UAE, Yemen, Bahrain and the Maldives all severed diplomatic ties with Doha. Some also cut transport links.

Egypt said it will be suspending air links with Qatar from Tuesday.

The decision, announced on Monday by the aviation ministry, would take effect from 0400 GMT and continue “until further notice,” with Qatari planes being unable to cross Egyptian airspace or land on its territory.

Iran earlier said it would be willing to send food supplies to Qatar following a complete blockade that has sparked an economic crisis and food shortages in the region.

The tiny kingdom is facing what is potentially its worst diplomatic crisis.