Free lifesaving Israeli phone app will set in motion emergency distress alert with a simple swipe of your finger.

Following the tragic murders of the kidnapped youths, 60,000 Israelis have already downloaded the one-swipe emergency alert application that was recently offered free to the public by the volunteer rescue organization, United Hatzalah (UH).

Parents are urged to download the lifesaving app called SOS, which could prevent future abductions, said UH founder and president Eli Beer. With one simple swipe of the finger, SOS subscribers can inform the non-profit organization, which has an active switchboard around the clock, that they are in distress and give the security forces permission to track their exact location using patented GPS technology.

The application, launched just days after news of the abductions emerged, is available on all major smartphones free of charge.

The app responds to apparent deficiencies with the method of simply placing an emergency call to the police in the event of a kidnapping situation. Until now, security forces would have to undergo lengthy legal processes to obtain permission to track an individual’s cell phone signal, prolonging emergency response times and the chance of their safe rescue.

While police received a distress call from the abducted teens minutes after they where taken, security forces were unable to determine their exact location or whether it was a crank call. The app allows for a discreet method to call for help.

The SOS app is based on United Hatzalah’s Irving and Cherna Moskowitz LifeCompass system, developed by NowForce, which has been instrumental in making UH the fastest emergency rapid response service in the world; volunteers arrive within an average of three minutes. 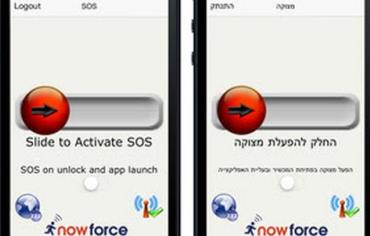 The LifeCompass technology was first developed for UH to ensure that medical volunteers and its trademark 300 ambucycles closest to the emergency receive mobile alerts and are dispatched The LifeCompass system optimizes response time by using GPS technology, enabling volunteers to reach casualties quickly wherever they are.

In a case of serious injury, time is limited – often to a three-minute window. The new SOS app takes the technology one step further with its easy single swipe activation, taking into consideration the time constraints and volatile nature of situations such as kidnappings.

The murders have highlighted the need for additional tools and technologies to avert such disasters. In regular calls to the police, such as the one made by the kidnapped teenagers, court permission is needed in order to track a mobile phone, said Beer. This procedure uses up precious minutes – often vital to the survival of the victims.

The new emergency alert establishes a waiver into the registration process, allowing UH volunteers at the 24/7 dispatcher center to track a situation from first alert until it is cleared. In addition to tracking the user via the smartphone, the system contacts any family or friends that are pre-programmed into the system during registration. Each and every call is taken seriously and followed up. Registration helps ensure that the app is not abused.

“Our main mission at United Hatzalah is to get to medical emergencies within two minutes all over the country,” explained Beer. “With the recent kidnappings, we feel obliged to share our knowledge and technology to provide that extra layer of protection for the people of Israel, we hope to have hundreds of thousands of children registered before the new school year begins.”

The app is designed to function as an emergency safety and security alert system and is not meant to replace direct verbal communication with police, fire or medical emergency dispatchers. The app is available on sos.nowforce.com in English and Hebrew.