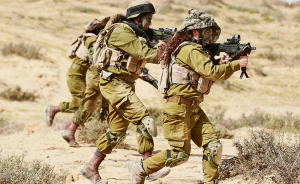 Years ago, such camps were also established for Druze and Bedouin Israelis wishing to volunteer for the IDF (Druze are required to serve, at their request, while Bedouins are not).

Last year, Lt. (ret.) Shadi Khalloul decided it was time for something similar for the growing number of young Israeli Christians choosing to take up arms for the Jewish state.

His mechina, which like the others is subsidized by the Israeli government, was established at Kibbutz Beit Zera on the southern shores of the Sea of Galilee.

Twenty-eight youngsters signed up, half of them Jews and the other half Christians.

All but one of the Christians refuse to be identified as Arabs. While their mother tongue is Arabic, they identify as Arameans, an ancient ethnic group that Israel decided to officially recognize several years ago at the insistence of Khalloul and other like-minded Christian leaders.

The youngsters have already been in the camp for several months now, and, according to a report in Ha’aretz, they’ve become fast friends.