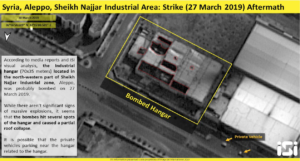 Here are the results of the attack (27 March 2019) on the Aleppo’s Sheikh Najjar industrial area, Syria. – Photo: Twitter/ImageSat Intl.@ImageSatIntl

“While there aren’t significant signs of massive explosions, it seems that the bombs hit several spots of the hanger and caused a partial roof collapse,” ISI said in its report.

The blasts also caused an electrical blackout in Aleppo, the country’s second-largest city.

“Barriers are detected near some of the entrances to the area where the two structures are located. It is possible that the whole perimeter is under the control and use of the same entity,” ISI said in their report, adding that private vehicles and trucks are seen in the images, both parked and passing by both bombed structures.

According to local reports, the March 28 attack also targeted Iranian ammunition dumps and the Nairab military airport used by Tehran on the outskirts of the city, the second such strike on the installation in less than a year.

But according to ISI “other structures in the same area claimed as bombed by media reports were found undamaged.”

While the Syrian army said that the strike caused only material damage, the London-based Syrian Observatory for Human Rights reported that at least seven Iranian-linked militia fighters were killed in the alleged Israeli strike.

While the IDF has not commented on the strikes, Acting Foreign Minister Yisrael Katz was quoted as saying by Haaretz on Thursday that “as far as Iran knows, it’s Israel” which carried out the strikes.

Israeli officials have repeatedly voiced concerns over Iran’s entrenchment in Syria and the smuggling of sophisticated weaponry to Hezbollah from Tehran to Lebanon via Syria, stressing that both are red-lines for the Jewish State.

In January, Prime Minister Benjamin Netanyahu said that Israel has a set policy of preventing Iran’s entrenchment in Syria, and that it would be enforced whether he is in Israel or abroad.

“We have a permanent policy to harm Iran’s establishment in Syria and to harm anyone who tries to harm us…This policy is permanent.”