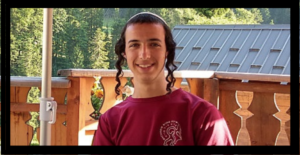 Last week, 18-year-old yeshiva student Dvir Sorek was found stabbed to death near his village of Migdal Oz in Judea and Samaria. Sorek had gone to Jerusalem to buy books for his teacher as an end-of-year present and was returning home when he was apparently targeted by Palestinian terrorists. His body was found by the side of the road, still clutching the books he had purchased, by popular Israel novelist and outspoken left-wing activist David Grossman.

Sorek was murdered almost exactly 19 years after his maternal grandfather, Rabbi Binyamin Herling, was shot dead in a terror attack near Nablus in October 2000.

I hate posting things like this, as Israelis mourn the death of a 19 year old, this can inflame anger & hate. But this is a reality we can’t ignore & must confront: Students at Birzeit University bear Ramallah hand out candy to celebrate the murder of 19 year old Israeli Dvir. pic.twitter.com/CJQiSq6i2l

Palestinians celebrated Sorek’s death by handing out sweets in the streets and setting off fireworks from a nearby Palestinian village as he was laid to rest.

Celebrating the murder of Jews with sweets has become customary in Palestinian society and a tradition not generally noted in the American press. In November 2014, Palestinians in the Gaza Strip celebrated an attack on a Jerusalem synagogue that left four dead and others wounded.

Following an October 2015 stabbing and shooting attack at the Central Bus Station in Beersheba, during which a young Israeli soldier was killed and many other commuters wounded, candy was distributed to passers-by in the streets of Shuafat, in eastern Jerusalem, to celebrate the “victory.”

In January 2017, Palestinians took to the streets and social media to celebrate a truck-ramming attack in Jerusalem in which four Israeli soldiers were killed.

It is not surprising to hear the Palestinian leadership praising the murder of Jews in Israel, as it immediately did this week after the murder of Sorek, calling it “a heroic operation” and a “natural response to the Israeli occupation’s crimes.” But to see the Palestinian people repeatedly celebrating these murders by passing out sweets in the street gives one pause and raises serious questions about the likelihood of a two-state solution with each side living in peace next to the other.

The reaction of Palestinians to the murder of Israeli civilians by Palestinian terrorists helps to explain why Palestinians repeatedly have rejected legitimate and generous offers by the international community and Israel to establish their own independent state next to Israel (in 1937, 1947, 1967, 2000, 2001 and 2008). They simply have no desire to live in peace next to the Jewish state of Israel.

Their goal from day one has been the extermination of Jews “from the river to the sea” (from the Jordan River to the Mediterranean Sea, including all of present-day Israel). The murder of Sorek is not an isolated incident but simply their latest effort to achieve this goal.

The Palestinian reaction to the murder of Israelis forces one to more closely examine the Palestinian narrative. That narrative includes many claims to support their cause: statelessness, occupation, refugees, violations of human rights. And yet the Palestinians are not unique in their circumstances. It is well-documented that there are well over 300 peoples in the world today with legitimate claims to statehood, and many of these people live under brutal occupation and deprivations far in excess of anything suffered by the Palestinians.

And yet despite their legitimate claims and grievous living conditions, none of these other stateless peoples have resorted to the kind of mass murder that Palestinians have subjected the world to over the past half-century.

We live in a ‘new’ world of heightened security (and what it costs to the world’s inhabitants) since the Palestinians began hijacking plane to Beirut, to blow up.

This is where the Palestinians are unique among the world’s independence movements. Palestinians virtually invented and perfected the art of political terrorism by hostage-taking, plane hijackings, stone-throwing, stabbings, shootings, and suicide bombings.

While 69 year old disabled World War II Veteran Leon Klinghoffer sat in his wheelchair aboard the Achilles Lauro cruise ship on October 7, 1985, four Palestinian terrorists shot him in the head and threw him overboard as his wife watched in horror. Leon and Marilyn Klinghoffer had been celebrating their wedding anniversary by taking this cruise.

the 1985 hijacking of the Achille Lauro cruise ship and murder of Leon Klinghoffer in his wheelchair; the 1996 Jaffa Road bus bombings which killed 45 people; the 1972 Lod Airport massacre; the 1974 Maalot massacre which involved a two-day hostage-taking of 115 Israelis and ended in the murders of over 25 hostages; the 1972 Munich Olympic massacre resulting in the death of 11 Israeli Olympic athletes; the 2001 Sbarro restaurant suicide bombing in which 15 people were killed, including seven children and a pregnant woman, and 130 wounded; the murder of Ari Fuld last year and of Dvir Sorek last week.

These are just examples and do not constitute a complete list.

It is estimated that approximately 4,000 Israelis have been killed in terrorist attacks since the founding of the state of Israel in 1948. This is the population equivalent of 200,000 Americans.

Despite this notorious history of Palestinian violence, there are those in America and Europe who, for their own reasons, continue to enable and normalize Palestinian terrorism by their support of the Palestinian “narrative.” In response to the brutal murder of Dvir Sorek, the progressive American Jewish magazine The Forward published an opinion piece which urged its audience not to “politicize” Sorek’s death but to remember the message of peace he was carrying when he was slaughtered (books by a peace activist). The opinion writer fails to even admonish Sorek’s killers or note that they, too, must have missed his message of peace.

At the end of the day, the terrorists who murdered Sorek, and their families, will likely get a sweeter deal than treats in the street. The Palestinian government has created a “Martyrs Fund” to pay a monthly stipend to the families of Palestinians killed, injured or imprisoned for involvement in attacking Israelis.

It is a system called “pay to slay” and it was reported that the fund paid out over $300 million in 2017 in amounts often exceeding $3,000 a month, at a time when the Palestinian government was struggling to pay its own civil servants. Sorek’s killers and their families are set for life, further incentivizing the murder of Jews.

The Shin Bet security agency announced Saturday that it had arrested two Palestinian cousins suspected of Sorek’s murder. The suspects hail from the Palestinian village of Bayt Kahil near Migdal Oz, and at least one is a member of Hamas. The Israel army said that over 100 residents of Bayt Kahil began hurling stones at troops while they were carrying out the arrest raid.

View Israel Hayom‘s publication of this JNS article at:
https://www.israelhayom.com/2019/08/11/an-israeli-is-murdered-and-the-palestinians-rejoice/

‘Pay to Slay’ Jews is an abomination. The Palestinians say it’s ‘compensation’ to someone incarcerated, or to the family of a hero martyred while participating in their “armed resistance.”

But the truth is: It’s the incentive to go out and kill Jews…and Abbas knows this.

So the Palestinian leadership perpetuates the conflict, regardless of the political atmosphere at the time, by teaching & preaching religious mantras (as depicted by the PA autocrat, pictured above) and then topping it off by honoring the attackers with timeless admiration & respect while providing financial guarantees that’s far above the average income derived from an honest job.

For decades no one listened to Israel about these incitements of violence against Jews. Israeli Ambassadors were met with deaf ears when pleading Israel’s case to world leaders. They may have sympathized with Israel’s predicament in private, but in public, nothing was done.

The situation was made abundantly clear, even providing the PLO’s menu, a price-list that explained who got how much for their monthly stipend.

But then, in an attack in Tel Aviv, things changed. An American veteran, a student from Vanderbilt was stabbed to death and the Palestinians celebrated.

Mar 8, 2016 – Taylor Force, 29, of Lubbock, Texas, a graduate student at Vanderbilt University, was killed in a stabbing attack near the Jaffa port.

American lawmakers who were sympathetic to Israel’s conundrum decided to take action against the Palestinian’s national project of paying roughly $350 million a year to cover the ‘Pay to Slay’ rewards. The United States gave the Palestinians far more than that each year, so in effect, US taxpayers were financing the killings, but then President Obama squashed the debate.

Watch (not so) surprise ending.

On August 3, 2017 the United States Senate Committee on Foreign Relations passed the Taylor Force Act by a vote of 16-5. On March 23, 2018, the Act was signed into law by U.S. President Donald Trump. The legislation directs the end of American economic aid to the Palestinian Authority until the PA changes its laws to cease paying stipends to individuals who commit acts of terrorism and to the families of deceased terrorists.

For the Palestinians, having Donald Trump in the White House was a historic nightmare. They could no longer threaten or manipulate a President. The PA leader was ‘warned’ when President Trump went to Bethlehem, where he spoke to the Palestinians.

President Donald Trump began to expose the Palestinians. He spotlighted their schemes, neutralize their threats and ended US aid that was potentially financing the murdering of Jews.

Recognizing the new change of policy, a few EU countries have ended financing the PA ….even old time supporter, Saudi Arabia. Some countries ended or suspended financing UNRWA and some European countries even withdrew funding to institutions named in memory of suicide bombers & assorted terrorists.

With all that has befallen the Palestinians in the past 2 years, Two thing still remains evident: The national project of maintaining ‘Pay to Slay’ will continue while public salaries are slashed in the face of financial collapse and celebrating the murder of Jews, by passing out sweets and cakes, will never end as long as Israel exists.