New hostilities, would bring pride & honor to the organization, but now, after major losses these past few years, the IDF has the capacity to defeat Hezbollah, bringing a real change in the area’s strategic balance.

AFTER EIGHT years of relative quiet on the Lebanese front, there is growing concern in Israel over possibility of a renewed outbreak of fighting with Hezbollah, the Iranian-backed Shi’ite militia. Israelis tend to attribute the protracted lull to deterrence ostensibly achieved through the Second Lebanon War in 2006. But there are other factors that have been no less central to the Hezbollah decision to avoid escalation against Israel. 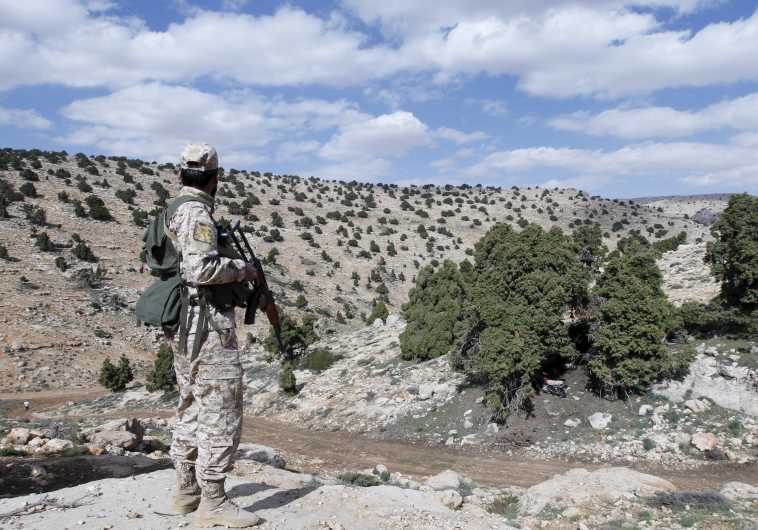 A Lebanon Hezbollah fighter carries his weapon as he stands in Khashaat, in the Qalamoun region. – Photo: REUTERS

For one, over the past few years Hezbollah has been deeply embroiled in the civil war in Syria. At Iran’s behest, it sent in forces to defend key ally Bashar Assad’s regime against opposition Sunni militias, especially the radical Jabhat al-Nusra and ISIS. Moreover, Hezbollah has been forced to deploy against radical Sunni efforts to extend the battlefield across the border into Lebanese territory. Hezbollah forces are also involved to a lesser extent in Iraq and Yemen.

This is a very dangerous game. Israel has made it clear that it will not allow the transfer of sophisticated weaponry and, according to foreign sources, has taken action to prevent such transfers – for example, bombing weapons-carrying convoys.

Israel is also taking steps to prevent the construction of the terrorist infrastructure on the Golan front. According to foreign sources, in one of these operations, Jihad Mughniyeh, son of the late Hezbollah terrorist mastermind, Imad Mughniyeh, and an Iranian general were killed. If Hezbollah persists in provoking Israel, this kind of friction could easily escalate to wider confrontation.

New hostilities, however, could also erupt at the organization’s initiative, as part of a strategic decision by its leaders or their masters in Tehran, and not necessarily as a result of spiraling escalation.

The new fighting could be used as a pretext for extricating Hezbollah from the Syrian quagmire, on the grounds that war with Israel demands an end to inter-Arab fighting.

Hezbollah is paying a heavy price for its involvement in Syria in terms of dead and wounded, spent ammunition and loss of legitimacy in the Lebanese domestic arena.

On the other hand, its fighters are gaining rich battlefield experience, which they would be able to exploit in another war with Israel.

Indeed, despite its involvement in Syria, Hezbollah continues to allocate most of its resources to future hostilities against Israel. After the Second Lebanon War, it focused initially on rearmament. This entailed restoration of the stockpile of rockets and ammunition destroyed or spent in the war, together with the absorption of more modern weaponry for a future showdown.

Today the organization has more than 100,000 rockets and missiles (compared to around 12,000 in 2006), along with unmanned aircraft, anti-tank weapons and anti-aircraft and land-to-sea missiles.

It has also invested heavily in restoring military infrastructures and building new mainly underground fortifications in hundreds of Shi’ite villages, which have been turned into bases for storing and launching rockets and missiles. Most of the Hezbollah command centers, weapons stores and launching zones are located in populated built-up areas, much of it underground, with the civilian population serving as a human shield for the Hezbollah fighters.

We can assume that the next round of hostilities with Hezbollah will be more difficult and more violent than the Second Lebanon War, partly because in a future conflict Hezbollah may adopt a very different strategy.

In the Second Lebanon War, it fired missiles and rockets at civilian centers, and its fighters deployed along a defensive line in south Lebanon where Israeli ground forces operated. Since then the organization seems to have incorporated a new battle doctrine, reflected in Hezbollah leader Hassan Nasrallah’s repeated claim that in the next war against Israel, his fighters would capture the Galilee.

Although this is idle rhetoric, the organization does have elite units capable of mounting rapid attacks on villages near the border, holding them for a limited period and crossing back over the border into Lebanon. Such cross-border penetrations could be achieved by cutting through or circumventing the security fence. But there are fears the organization could use cross-border attack tunnels. So far no such tunnels have been located. But the IDF is not ruling out the possibility that Hezbollah has, in fact, managed to build some and will try to use them in the event of war.

Nevertheless, most of Hezbollah’s power still stems from its capacity to fire large numbers of rockets and missiles at Israeli population centers, turning the civilian rear into a front line. Its goal will be to create chaos on the home front, with extensive damage and a high casualty toll.

As part of this effort, it will attempt to strike at border communities, triggering a mass exodus of civilians fleeing their homes.

Hezbollah and the Iranians are also cooperating in cyber warfare.

For over 40 years since the Yom Kippur War, there has been relative quiet on the Golan Heights, maintained even while fighting raged against Hezbollah in Lebanon.

Now, it seems, in any future confrontation with Hezbollah, hostilities will be conducted in both the Lebanese and Syrian theaters. In other words, the IDF will have to deal with a war on two fronts and, in an extreme scenario, on three – if the Palestinians enter the fray.

If Hezbollah does indeed adopt the purported new strategy suggested by Nasrallah, any future war is likely to begin with a surprise attack that includes ground forces trying to overrun civilian communities, and massive rocket and missile fire at civilian centers and strategic targets.

The current Hezbollah deployment suggests over 1,000 projectiles a day.

In light of the seriousness of the threat, Israel needs to reexamine the degree of readiness on the home front and to strengthen it as much as possible. This means reinforced “active defense” (rocket and missile interceptor systems like Iron Dome and Magic Wand) and “passive defense” (bomb shelters, specially sealed rooms and so on).

More importantly though, the IDF will need to come up with a crushing offensive response that hurts Hezbollah badly and shortens the war.

Over the past few decades Israel has adopted a strategy of deterrence, rather than battlefield victory, preferring to use the air force and artillery to exact a price and restore the deterrent balance, and deliberately refraining from massive operation of ground forces.

In any future confrontation with Hezbollah, Israel will have to reexamine this doctrine, and consider strategic options that entail large-scale ground maneuver.

The IDF has the capacity to defeat an organization like Hezbollah on the battlefield and, if ordered to do so, to bring about not only a temporary lull, but a real change in the strategic balance in the north.

(Col. Res.) Dr. Shaul Shay, director of research at the Institute for Policy and Strategy at the Interdisciplinary Center in Herzliya, is a former deputy head of the National Security Council (2007-2009)