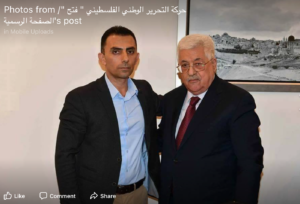 Rafat Jawabra was received in the PA president’s office on Sunday evening. Photos of the meeting were posted on Fatah’s official Facebook page and in the post, Jawabra is referred to as the commander of the al-Aksa Martyrs Brigades, a known terrorist organization.

Jawabra, head of a Fatah terrorist cell in the Bethlehem area, helped plot a suicide bombing attack against Israel in 2002. The bomber, a resident of the village of al-Doha near Bethlehem, tried detonating an suicide bomb belt at the entrance to a supermarket in Efrat. The belt did not detonate and after he was identified as a bomber, the attacker was shot and killed by a local resident. Jawabra was later caught by the IDF and was sentenced to 15 years in prison. He was released two weeks ago.

In May, while still in prison, Jawabra was elected the mayor of al-Doha on the Fatah ticket.

In another Facebook post, Jawabra is seen speaking at a rally with armed and masked gunmen, honoring him upon his release from prison.

“Abu Mazen celebrated Christmas not by hosting Christians who are oppressed in the Palestinian Authority but by honoring a terrorist whose hands are stained with the blood of innocent citizens,” he wrote on Twitter. “The culture of Palestinian terrorism destroys every glimmer of hope for peace.”

PA Pres Abbas celebrated #Christmas by honoring a Fatah terrorist who masterminded terror attacks that targeted Israelis & was released from Israeli prison after 15 years. This is how the terrorist’s old buddies welcomed him.

This culture of terrorism kills any chance for peace. pic.twitter.com/eCVr5c0ZIg