Criticism of Palestinian Authority officials can lead to arrests then jail, Palestinian journalist reports: ‘The PA police asked me why I liked to curse Abbas on my Facebook page’

Pharmacist Raed Qubbaj was busy with a customer when a man working with the Palestinian Preventative Security Forces came into his Ramallah pharmacy and placed him under arrest earlier this month. 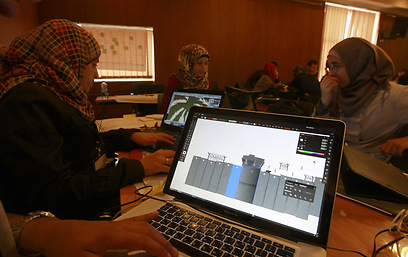 “He didn’t tell me why and he had no official papers from any court,” the father of three boys told The Media Line.

Qubbaj handed over his mobile phone and laptop to the man who had a car waiting outside. He agreed to go, thinking it was all a mistake, and he would be back in a few hours. It was only after he was given a medical exam and put in a jail cell was he told he had been arrested because of comments criticizing Palestinian officials on Facebook.

During the interrogation, the security officers showed him several printouts of his Facebook page, the statuses highlighted on some pages, circled on others.

“They asked me why I liked to curse the President (Mahmoud Abbas) on my Facebook, a charge I denied. Then they asked me if I had made comments against an official from the President’s office and I admitted yes,” Qubbaj, 42, said.

The incident in question occurred over the summer, just before the fighting began between Israel and Hamas in the Gaza Strip. In an interview with Al Jazeera, Nimmer Hammad insulted the news anchor when she asked him what Abbas was doing in the wake of the brutal killing of Palestinian teenager Mohammad Abu Khdeir. Qubbaj wrote on Facebook that listening to Palestinian officials like Hammad made him want to vomit.

“They told me that writing bad things about an official is the same as writing about the whole Palestinian presidency,” Qubbaj said.

After four nights of sleeping on a dirty mattress smelling of urine, Qubbaj was released and given a November court date. If he misses the date, he will have to pay a $1400 fine.

Palestinian Security Forces Spokesman Adnan Al-Damiri refused to elaborate on Qubbaj’s story but stressed that in such cases, no arrests are made without official court papers.

“We will never arrest someone who is practicing freedom of speech or freedom of expression, whether he does it on Facebook or elsewhere,” he told The Media Line.

But the Palestinian Center for Development and Media Freedoms (MADA) says the number of West Bank residents arrested by Palestinian Authority (PA) security forces for anti-PA comments on social media is on the rise. While precise statistics are hard to pin down, MADA says the number has doubled in the first six months of 2014 compared to the year before.

While the total numbers are still small, the increase is a cause for concern, they said, urging the Palestinian Authority to protect journalistic freedom of speech.

Some journalists say they have learned to practice self-censorship to avoid arrest. Palestinian journalist Qutaiba Qassim says he has been summoned for questioning several times over the past six years. The most recent interrogation was conducted by the Palestinian Central Intelligence early this month.

“They asked me to come with them for five minutes, and then they threw me into solitary confinement for more than seven hours,” Qassim told The Media Line. He was arrested for commenting on a photo of police arresting then-Hamas Prime Minister Ismail Haniyeh. He said the photo proved that anyone could be arrested.

He would visit the Palestinian intelligence unit in Bethlehem five times. Qassim said that because his news agency Asdaa’ is based in Gaza, the Palestinian police tagged him as a Hamas sympathizer, who opposes Mahmoud Abbas.

The interrogators told him that he was being monitored, and that they were reading everything that he writes.

“If I go into my Facebook, I get interrogated?” he asked. “The PA talks about freedom and democracy, where is it? We want to touch the freedom.”

Qassim continues to work in the field of media but has admitted to easing back on his reporting, especially when it comes to reporting on Palestinian officials. He says he has his future to think about.

Meanwhile, Raed Qubbaj has no plans to deactivate his account. “I still believe in freedom of speech. I will not stop writing on my Facebook,” the Palestinian pharmacist said.