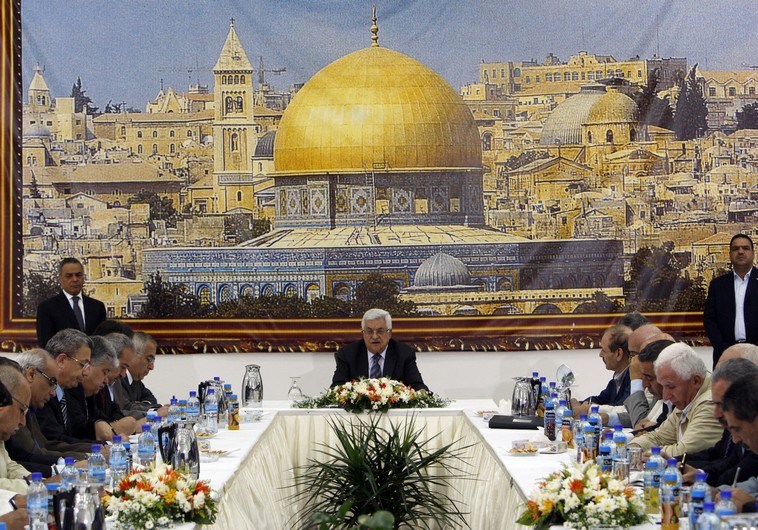 Abbas’s move came in response to the failure of the Palestinian statehood resolution at the UN Security Council on Tuesday.

Chief PLO negotiator Saeb Erekat announced that the applications to join the international organizations and treaties would go into effect in 90 days.

Abbas signed the applications at the beginning of an emergency meeting of PLO and Fatah leaders in Ramallah to discuss the repercussions of the Security Council vote.

The Palestinian leaders voted unanimously in favor of the decision to join international organizations and treaties.

The signing ceremony was broadcast live on Palestine TV.

Referring to the decision to join the ICC, Abbas said, “We want to file a complaint [against Israel.) We are being attacked. Our lands are being attacked every day. Who are we going to complain to? The Security Council has let us down. There’s an international organization and we’re going to it to complain.”

Earlier, Abbas said that he was determined to pursue his efforts to achieve a Palestinian state despite the failure at the Security Council.

Speaking to Fatah supporters at a rally in Ramallah marking the 50th anniversary of the launching of the group’s first attack on Israel, Abbas said: “The Security Council is not the end of the world. Last night’s session was not the end of the journey. We have something to say about this as of tonight. We and our children will continue until we arrive at Jerusalem, the capital of the Palestinian state.

Some Palestinian officials and groups called on Abbas to immediately apply for membership of international organizations and treaties, including the International Criminal Court, in response to the failure of the Security Council to vote in favor of the resolution.

In his speech, Abbas claimed that the statehood bid failed because it had been “vetoed.”

The resolution did not pass because only eight Security Council members voted in favor of it and not because of a US veto.

However, Abbas told the Fatah gathering: “Last night we got a veto. This is not the first and last veto. But we will remain steadfast and we will continue until we achieve our rights. They don’t want to give us our rights. Rights are not given; they are extracted.”

Abbas said that there would be no Palestinian state without Jerusalem and the Gaza Strip.

Voicing deep disappointment over the outcome of the Security Council vote, several Palestinian officials criticized the US for opposing the statehood bid.

She said that it is “ironic that while the UN designated 2014 as the International Year of Solidarity with the Palestinian people, the resolution failed to pass as an indication of a failure of will by some members of the international community.”

Ashrawi claimed that the articles of the Palestinian resolution are consistent with declared American policy, international law, and the requirements of peace. “The extent to which the US has gone to protect Israeli impunity and lawlessness and to enable its criminal behavior is disgraceful and dangerous,” she added.

Hamas welcomed the Palestinian Authority’s decision to join 20 international organizations and treaties as a “step in the right direction.”

A statement issued by Hamas in the Gaza Strip said that the Palestinian move should be part of a “general policy frame and joint national project” endorsed by an interim leadership of the PLO.

Hamas said that the decision should be followed by a series of steps, including halting all forms of negotiations with Israel, especially security coordination and the lifting of the blockade on the Gaza Strip.