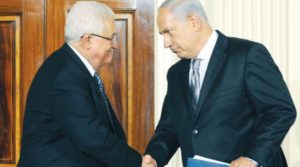 Abbas told Russian President Vladimir Putin during a phone conversation that the Palestinians want the proposed negotiations to be based on “international legitimacy” and with the participation of other countries, according to a statement released by the PA’s official news agency Wafa.

“Abbas briefed Putin in the latest political developments, particularly regarding Israel’s annexation plan, which is rejected by the Palestinians, the Arabs and the international community,” the agency said.

Abbas, the agency said, expressed appreciation for Russia’s rejection of the Israeli plan to apply its sovereignty to parts of the West Bank “by force and its support for the Palestinians’ right to independence and freedom.”

He also briefed the Russian president on Palestinian efforts to combat the spread of the coronavirus pandemic and congratulated him on the results of the recent vote on Constitutional amendments, which included extending presidential term limits.

Putin, for his part, voiced his country’s support for the two-state solution and stressed the importance of reviving the peace process on the basis of international resolutions and under the sponsorship of the Quartet, the PA agency said.

In addition, Putin expressed Moscow’s readiness to work toward ending the dispute between Abbas’s Fatah faction and Hamas.

Abbas begins the game anew. – Seeking to resume the path he’s manipulated many times in the past, that plays out without consensus, he can appear as a ‘peace-seeker’ while actually persuading Western Christian leaders to renew their ‘humanitarian aid’… Otherwise, how will he, his clan and the Fatah leadership, be able to go on skimming a decent living?