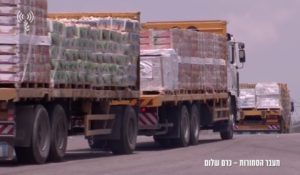 IDF planes finished this morning, Sunday, demolishing a terror tunnel that passed under the Kerem Shalom Crossing from Gaza into Israel.

The IDF says with certainty that the tunnel belonged to Hamas.

The tunnel started in the Rafiah area 900 meters (2,953 feet) into Gaza and extended 180 meters (591 feet) into Israel. It passed under the gas pipeline between Egypt and Gaza.

IDF Spokesperson Ronen Manelis says that the tunnel was located several days ago.

“Last night, we carried out a professional and precise operation over a blatant violation of Israeli sovereignty,” Defense Minister Avigdor Liberman said in a statement. “The demolition of the attack tunnel system is an important factor in the policy of systematically harming Hamas’ strategic ability. The message to Gaza leadership and its residents is clear: Invest in the sanctity of life, and not in burial tunnels.”

Last night, it was reported that Air Force planes on Friday night had attacked “terrorist infrastructure” in southern Gaza, near the Gaza-Egypt border.

“The Hamas terror group is responsible for everything which occurs in Gaza and comes from Gaza,” the IDF said in a statement.

This morning, the IDF completed the destruction of the third Hamas terror tunnel infiltrating Israeli territory in the past 2 months using the latest technology, intelligence, and operational capabilities pic.twitter.com/ZAh1biCjfN