Bahrain said it had arrested four suspects on Tuesday in the bombings that killed two people in the capital Manama and accused the Lebanese militant group Hezbollah of being behind the attacks. 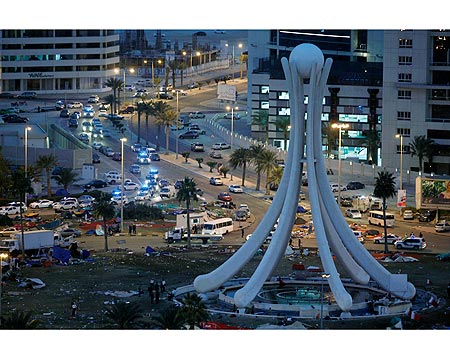 Public Security Chief Major-General Tariq Al Hassan said in a statement published by the official Bahrain News Agency (BNA) the suspects were detained after prosecutors issued arrest warrants and police were hunting for other killers.

The five home-made bombs on Monday bore the hallmarks of Hezbollah, the Shiite group allied with Iran, authorities said.

“Their terrorist practices prove that they have been trained outside the kingdom,” BNA said. “The hallmarks of Hezbollah are crystal clear.”

BNA quoted Information Minister Samira Ibrahim bin Rajab as saying the bombings were staged by terrorist groups trained outside Bahrain and based in countries including Lebanon.

She said the groups were operating under principles set by Iranian Supreme Leader Ayatollah Ali Khamenei and that 19 pro-Iran satellite media channels were inciting their supporters in Bahrain to subvert the government.

The blasts in the capital Manama on Monday killed two street cleaners and wounded another, according to state media.

Some opposition activists have suggested the attacks, which came a few days after the government banned opposition gatherings with the stated goal of ensuring public safety, could have been the work of forces trying to justify the clampdown.

The government has repeatedly accused Shiite Iran of fomenting the turmoil, a charge the Islamic Republic denies. Hezbollah denies involvement in the Bahrain protests, but has criticized the government’s handling of them.

Bahraini police said they have been the target of numerous attacks with homemade bombs since April, including one that killed a policeman last month.

The UN Secretary-General’s spokesman Martin Nesirky said in an e-mailed statement the UN condemned the bombings in Bahrain and that such violent acts could not be justified by any cause.

“We call on all concerned to exercise maximum restraint and to refrain from any provocations. We urge all Bahrainis to come together in a spirit of national unity and to resolve differences peacefully through dialogue and reconciliation.”