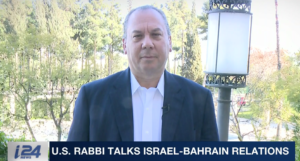 Rabbi Marc Schneier, a flamboyant New York religious leader & head of the inter-faith Foundation for Ethnic Understanding predicts “diplomatic relations between Israel and the Gulf [States] within 2 years.”
– The Rabbi also praised Qatar’s ‘dynamic’ leadership for reaching out to Israel, after Qatari diplomat revealed he secretly visited Israel 20 times since 2014.

Muslim-majority Persian Gulf kingdoms are waiting for Israeli Prime Minister Benjamin Netanyahu to make a “bold and courageous” gesture to kick off the process of forging diplomatic ties with Israel, a prominent US rabbi told i24NEWS on Wednesday, fresh from a visit to Bahrain.

“I am going to be so bold as to predict that you will begin seeing diplomatic relations between Israel and the Gulf [countries] within two years,” predicted Rabbi Marc Schneier, a flamboyant New York religious leader and head of the inter-faith Foundation for Ethnic Understanding, who says he has a long association with Arab rulers.

“I’ve been involved in visiting the Gulf since 2009,” Schneier, whose organization promotes ties between Jewish and Muslim communities, said in Jerusalem.

“Not only my connectivity with the royal family of Bahrain but of Qatar, Saudi Arabia, the United Arab Emirates — and I have seen some remarkable and extra changes in their attitudes towards Israel and we are truly living in exciting and historic times.”

He claimed that of the six Gulf states — Saudi Arabia, Oman, Kuwait, the United Arab Emirates, Qatar and Bahrain — the latter is the most eager for rapprochement with the Jewish state.

“I am very, very optimistic that we are living in a wonderful time as Israel and the Gulf states come closer together,” he said.

Even amid Muslim outrage at US President Donald Trump’s decision to recognize Jerusalem as Israel’s capital in December, a small religious delegation from Bahrain conducted a public visit to Israel.

Schneier also confirmed he had facilitated talks between Bahrain’s King Hamad and Israel.

“Yes I have relayed some of these messages to Israeli officials.”

“I believe we need some bold courageous leadership coming from the Israeli side,” he added, using as an example then-President of Egypt Anwar Sadat’s decision to break an anti-Israel taboo and visit Jerusalem in 1978.

“I believe that if the prime minister of today or whoever will be over the prime minister over the next two years — if that leader were to reach out and to take this initiative then they would be welcomed very warmly by the various Gulf states in the region,” he told i24NEWS.

While often hinting at blooming ties with Arab states, Israel has sent mixed signals about engaging with Qatar, the subject of a fierce diplomatic boycott by the Saudi and United Arab Emirates authorities.

Earlier this week Israel’s ambassador to the US Ron Dermer told the Jerusalem Post that Jerusalem is “emphatically opposed” to meetings between US Jewish leaders and the gas-rich kingdom.

However last week a senior Qatari diplomat revealed that he had visited Israel more then 20 times since 2014.

Malcolm Hoenlein, executive vice chairman of the Conference of Presidents of Major American Jewish Organizations — who has been involved in dialogue with Qatar — recently told i24NEWS that Israel would need to make progress on peace with the Palestinians before Gulf states would seriously entertain public ties with Israel.

During visits to “many Arab countries in recent months” he said he found that “they see the Palestinian-Israeli issue as an obstacle to what they think can be an important, mutually beneficial relationship [with Israel].”

Schneier, who is known as much in the US for his gossip-column-ready personal life as for his interfaith work, defended Qatar’s sincerity in reaching out to Israel.

“I’m not one of the Johnny-come-latelies who has entered this fray in the past few months, so I have a very unique perspective,” he said, saying he’s been involved with the Qatari royal family for “a long time.”

The full interview with Rabbi Marc Schneier on The Rundown: