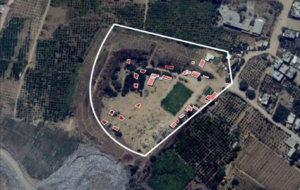 Hamas and the Palestinian Islamic Jihad said Saturday night that a ceasefire has been reached with Israel amid the recent escalation of violence that saw over 200 rockets fired from Gaza to Israel and IDF attacks on dozens of targets in the strip.

“The regional and international mediation has lead to an end to the current round of fighting between the resistance and the Israeli army,” the terror group said.

A senior Israeli defense official said in response to the reports of a ceasefire: “Only the facts on the ground would dictate our response.”

Hamas spokesman Fawzi Barhoum told Reuters: “Efforts by many parties have continued since the beginning of the escalation and the Israeli bombardment on Gaza. They were crowned by the success of the Egyptian effort to restore calm and end the escalation.”

The Palestinian Islamic Jihad militant group said in a separate statement that a truce had been reached.

Earlier, Hamas confirmed there were talks with Egypt and other international players in an effort to stop the escalation. “Israel started the attacks and it must stop,” a Hamas official said. “The movement is responded to the Israeli aggression.”

The Palestinian Islamic Jihad, meanwhile, said it would halt its fire if Israel stopped its airstrikes.

Sources in the Gaza Strip told Ynet that Egyptian intelligence has decided to intervene in the situation and has contacted the Hamas leadership in an effort to stop the violence.

According to the sources, the Egyptians are in contact with Hamas deputy leader in the strip, Khalil al-Hayya, and Hamas official Ruhi Mushtahi. The two have been in Cairo since the beginning of the week for the talks with the heads of the Egyptian intelligence on restarting the Hamas-Fatah reconciliation.

Over 100 rockets and mortar shells have been launched at Israel since 3pm Saturday, with 20 of them intercepted by the Iron Dome missile defense system and 73 falling in open areas.

Over 150 Code Red rocket alerts have been sounded across the Gaza border communities, as well as in Sderot and Ashkelon, since 1:35am when the IAF strikes in Gaza began.

Aharon Buchris who was wounded in rocket hit on his home in Sderot – Photo: Barzilai Medical Center

Meanwhile, 11 fires broke out in Israeli communities near the Gaza border as a result of incendiary balloons and kites, including two in the Gvar’am forest. Firefighters were able to gain control of all of the fires.

The strike was conducted after IDF troops warned residents of the building in advance. The IDF will operate against any point from which Hamas operates or trains terrorists. This strike is one of many examples of the IDF’s intelligence and operational capabilities pic.twitter.com/2nYImjTtDd

On the Palestinian side, two teenagers aged 15 and 16 were killed in a strike on an unfinished four-stroy building in the Al-Shati Camp near a Hamas police and security compound, which was used by the terror group as an urban warfare training facility. Ten others were reported wounded in the strike, which reduced the building to rubble.

AFP reported the two teens were on the street outside the building, which was empty at the time of the strike.

Under the building, Hamas dug a tunnel to train in underground warfare. The IDF said the tunnel is one of a network of underground tunnels dug by Hamas in the Gaza Strip.

During the overnight round of airstrikes, the IAF attacked two Hamas terror tunnels in Rafah and Beit Hanoun and a logistical center for the incendiary balloons and kites operations, to which the terror organization retaliated by firing 31 projectiles at Israel (27 mortar shells and the rest rockets).

Code red sirens were repeatedly sounded throughout the night across Israel’s southern communities—at the Sha’ar HaNegev, Sdot Negev, Eshkol, and Hof Ashkelon regional councils, as well as in Ashkelon’s industrial area—as more and more rockets and mortar shells were launched from the Gaza Strip.

According to IDF Spokesman Ronen Manelis, Saturday afternoon’s strikes were “the biggest daylight strikes carried out since Operation Protective Edge.”