The departure from Sinai Peninsula, of 9 Christians families living near Egyptian border with Israel fuels worries of rise of Islamism.

ISMAILIA – Most Christians living near Egypt’s border with Israel are fleeing their homes after Islamist militants made death threats and gunmen attacked a Coptic-owned shop, a priest said on Friday. 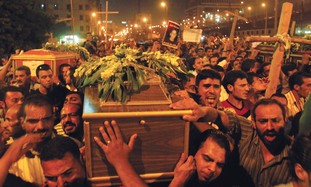 The departure of nine families that made up the small Christian community in the border area of Egypt’s Sinai peninsula will fuel worries about religious tolerance and the rise of militancy after the overthrow of president Hosni Mubarak last year.

“Coptic Christian families decided to leave … out of fear for their lives after the threats and the armed attack,” said Mikhail Antwan, priest at the Coptic Margirgis church in the North Sinai town of al-Arish.

Death threats had been printed on flyers circulating in the desert area, he added.

Two armed men riding a motorcycle opened fire on a Coptic-owned shop in Rafah on Wednesday but no one was injured.

Two families from the small community had already left while the rest were still packing up their possessions in Rafah and Shaikh Zuwaid after living 20 years in the area, he added.

All were planning to move to al-Arish, the administrative center of North Sinai, where security was better, the priest said.

Islamists with possible links to al-Qaida have gained a foothold in the area, analysts say.

Israel has voiced concern about security in Sinai, where at least four cross-border attacks have taken place since Mubarak was toppled in February 2011.

Egypt’s new president, Mohamed Morsy, has vowed to restore order. But efforts to impose central authority are complicated by the indigenous Bedouin population’s ingrained hostility to the government in Cairo.

A local official, who asked not to be named, confirmed the departures and said the families planned to return when security improved. It was the second wave of Christian departures – another seven families left soon after Mubarak’s fall.